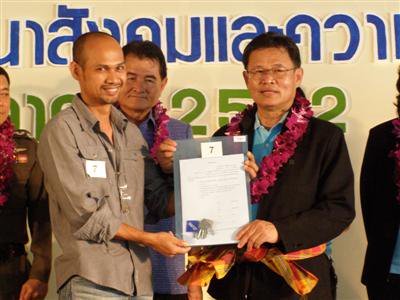 SRISOONTHORN, PHUKET: A low-cost housing project opened in Thalang this week is set to become home to more than 400 low-income families.

Loans from the Government Housing Bank have allowed many of the families to buy units in the latest ‘Eua Arthorn’ public housing project and become home owners for the first time.

Shared facilities include a health park and public garden areas.

The development is part of a nationwide initiative by the National Housing Authority (NHA) to provide accommodation for homeless or low-income families.

Also present were many of the new home owners.

Each of the 1,033 units comprises one living room, one bedroom, one bathroom and a balcony.

Some of the families bought more than one unit.

Ms Suwida Pitchyot, a 40-year-old mother from Chiang Rai, had mixed feelings about moving in.

“After working here for eight years, I feel pretty happy to have my own place,” she said.

“I’m not over the moon. It’s not only me who will stay in the apartment, but also my husband and 10-year-old child,” she explained.

“But paying for this home loan is better than paying rent because in the end the apartment will belong to me,” she said.

Another new resident, Ms Wilailuck Kaewrungrueng, 35, agreed the units were on the small side.

“At first we booked two units, but we were afraid we couldn’t afford it because we have three children to bring up. In the end we just took one unit,” she said.

“Although the quality isn’t that high, it’s reasonable considering the price,” she added.

The next NHA project in Rassada is also under construction.

Comprising 702 units in 16 three-story buildings, that development is just over 53% complete.

National average monthly income per household in Thailand was 18,660 baht in 2007, according to most recent data released by the National Statistics Office.

Despite being near or above this figure, many Phuket families cannot afford to buy their own homes.

Reasons include land costs that are well above the national average as a result of the real estate boom and development of the tourism industry in recent years.