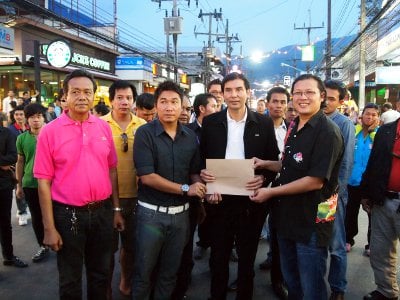 PHUKET: Government spokesman Prompong Nopparit was back in Phuket last night to launch a new tourist safety campaign that will see a rapid expansion in the number of closed-circuit television cameras in Patong and other popular tourist destinations.

Mr Prompong, a party list MP for the ruling Pheu Thai Party, at 7pm held an informal meeting with the press on Bangla Road, where he also met with local business business operators and their staff.

The purpose of the latest visit was to launch a nationwide “500,000 eyeballs for tourist safety and security” tourist safety campaign. Phuket will serve as the pilot province for the campaign, which will subsequently spread to other popular tourist destinations around the country, he said.

Accompanying Mr Prompong on his tour of the walking street were Preechavude “Prab” Keesin, in his capacity as chairman of the Patong Municipality Community Groups Association, and Patong Entertainment Business Association (PEBA) President Weerawit Kurasombat.

Both men presented Mr Nopparit with a document assuring the readiness of their groups to take part in the campaign, a key of which is to have business operators take the lead in installing CCTV cameras in order enhance surveillance in and around their businesses.

Mr Prompong, who oversees the Andaman region for the Pheu Thai Government, said the visit to Phuket follows an order by Prime Minister Yingluck Shinawatra in the aftermath of the recent bomb explosions in Bangkok.

His mission is to quell fears about tourist safety in the region and enlist local business operators and residents in ensuring tourist safety and preventing similar incidents from occurring here, he said.

The name of the campaign stems from the fact that Phuket has a population of 250,000 people listed on house registration forms, which calculates to 500,000 eyeballs, Mr Prompong said.

Speaking on the expansion of CCTV coverage in Phuket, Mr Prompong said he had received a good response from local business operators. The goal is to expand surveillance capacity to “full coverage” by installing cameras not only in front of their establishments, but also behind and in nearby areas of high risk.

He estimated that some 10,000 cameras would be needed to reach the goal in Phuket.

Patong currently has “very few” [government-installed] CCTV cameras and some of these do not function properly. Only 18 of these units are confirmed to be operational, he said.

He had already discussed the need for added CCTV coverage with Phuket officials and intends to ask PM Yingluck Shinawatra to fund CCTV expansion in tourist destinations including Chiang Mai and Pattaya as well as Phuket, he said.

However, as it would take too long to wait for central government budget approval and disbursal of funds, the private sector is the key to increasing coverage in the near term, he said.

Mr Weerawit said his PEBA members already encouraged staff to look out for the safety of tourists, but agreed that an expansion of CCTV coverage in known risk areas would further increase safety and security.

The PEBA members fully understand the importance of safety and security in a town that hosts so many tourists annually, he said.

The need for CCTV expansion was already a topic of discussion among PEBA members before the “500,000 eyeballs” campaign began, he said.

Preechavude “Prab” Keesin, also the son of Patong Mayor Pian Keesin, said an increase in the number of CCTV cameras installed by the private sector was already evident.

Although still known locally as Soi Tan (‘dead end soi’), the road is now open to through traffic and has developed into a center of Thai-oriented nightlife in Patong in recent years.

Similar developments in other parts of Patong were sure to improve the security situation overall. Business operators understand the many security benefits CCTV surveillance brings to their own establishments, protecting their own interests as well as those of their guests, he said.