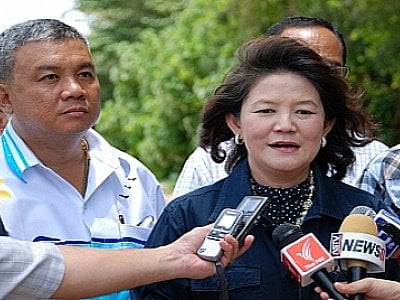 Ms Anchalee posted the news that the decades-old project had been shelved on her Facebook page on Thursday.

However, the minutes of the October 2 Cabinet meeting posted online do not show any mention the Phuket ICEC project at all.

Regardless, Phuket Democrat MP Anchalee told the Phuket Gazette, “The Cabinet under Prime Minister Yingluck Shinawatra made a resolution on October 2 to cancel the Phuket ICEC budget of 2.6 billion baht without any clear reason.

“The only notification was that the budget will be allocated to other economic plans,” she added.

“I do not know why they canceled the project, because the 2.6bn baht budget does not affect any other project. The budget for the Phuket ICEC was funded under a loan from the World Bank and it was approved as a Development Policy Loan (DPL) under the Thai Khem Kaeng (“Strong Thailand) fiscal stimulus program launched by the previous Cabinet under the former Thai PM, Abhisit Vejjajiva,” Ms Anchalee explained.

“The project was even approved by the current Cabinet at the mobile Cabinet meeting in Phuket in March,” she added.

Senator Thanyarat supported the call for Cabinet to reconsider the resolution.

“The Phuket ICEC is a very good project that will support Phuket’s tourism industry during the low season. A lot more tourists will come to Phuket and make Phuket a place to hold world-class meetings. This project will also benefit Phang Nga and Krabi, as well,” she added.

Ms Anchalee said that local business leaders were pushing hard to revive the project, and that a delegation from Phuket was likely to lobby the prime minister at the mobile Cabinet meeting on Koh Samui today (October 21). PM Yingluck and the Cabinet arrived on Samui yesterday afternoon.

“Business operators in Phuket are holding discussions to find a way to bring back the ICEC,” Ms Anchalee said.

“One of the first steps is to ask Finance Minister Kittiratt Na-Ranong and Treasury Department Director-General Narit Chaisutra to explain why the project has been canceled,” she said.

The Phuket ICEC project, decades in coming, has stalled over its failure to pass its Environmental Impact Assessment (EIA).

The Office of Natural Resources and Environmental Policy and Planning (ONEP) has refused to approve the project’s EIA report over its “main concerns” that the site was once a nesting place for sea turtles, and that the project’s long-term economic viability is questionable.

The ONEP has remained steadfast in its decision, despite repeated attempts by local experts and the Phuket Governor that the reasons given for stalling the project were unfounded.

Over this, Ms Anchalee expressed her exasperation. “As I said, I have no idea why the project was canceled as it is much needed by Phuket and the other Andaman provinces in terms of tourism. It will bring a lot more tourists in.

“Only the EIA committee’s permission is needed. If it passes this process, it will be free to go,” she explained.

“The Government itself has announced its policy to increase the national revenue generated through tourism to about 2.2 trillion baht and to have 30 million tourists visit Thailand annually.

“Phuket is second only to Bangkok in generating income through tourism. So the reason the project was canceled must be clarified,” Mrs Anchalee said.