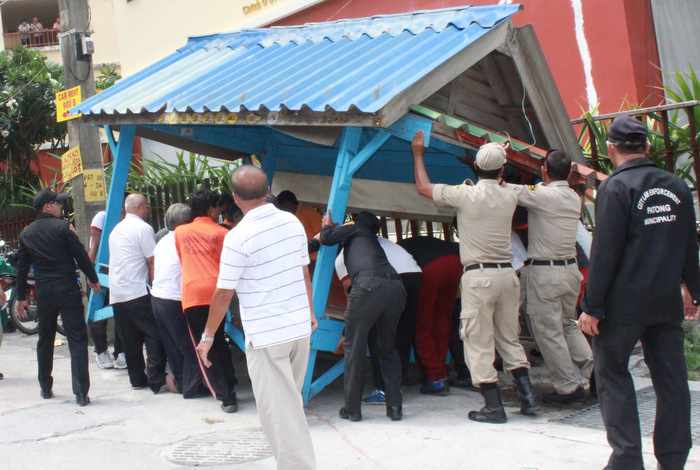 Maj Gen Paween Pongisirin of Region 8 Police said that he considered any further action against illegal taxi operators a matter to be dealt with by local police.

“However, if the local police seem to be overlooking the problem, then we [Region 8 Police] will investigate the officers in question,” Gen Paween told the Phuket Gazette.

“I haven’t heard about illegal taxi stands being rebuilt, but if it is true, then local authorities must act quickly to clear them.”

The police chiefs of every major tourist area where illegal taxi stands were torn down in the taxi mafia purge last month say that they have no knowledge of any the stands being rebuilt since the crackdown.

However, they all vowed to investigate any reports made.

Cherng Talay Police Superintendent Paworn Pornpromma was sure that such reports in his area were just rumors.

“We check every day, but we still have not seen the illegal taxi drivers return,” he said.

“We tore down 36 illegal taxi stands, and I haven’t seen any of them rebuilt. I have ordered my officers to be on the lookout for this in every corner of my jurisdiction,” he said.

“But, I will personally check again. If we find any illegal taxi stands, we will destroy them.”

In Patong, Police Superintendent Chiraphat Pochanaphan said, “I haven’t heard anything about this. I don’t know if it is true or not, but I will order my officers to check.

“If it is true, I will tear down the stands again and charge those who rebuilt them with disobeying an officer.”

Col Chiraphat said he was thankful to hear that tourists and local residents were reporting any activities that may mark a possible resurgence in illegal taxi drivers.

“Patong is our responsibility; we want to keep it clear,” Col Chiraphat said.

“We are not done with them yet,” he warned. “Previously, we did not have enough evidence to secure arrest warrants, but now we are gathering more evidence. We will arrest the bad guys.”