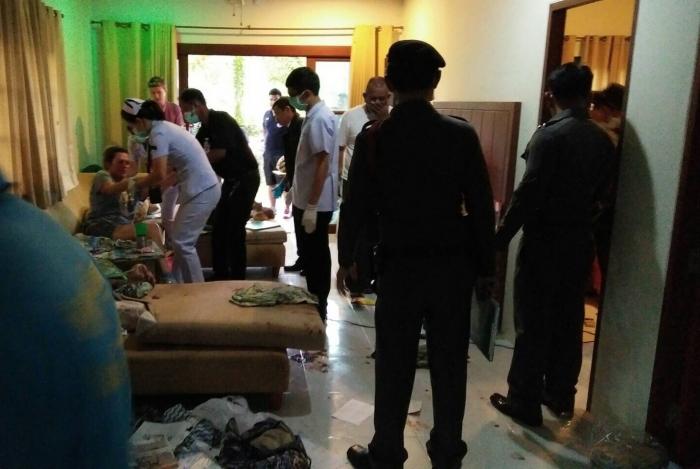 PHUKET: Police are working to unravel the mystery of a Russian man’s death at a Bang Tao house yesterday evening.

Lt Col Sakon Krainara of Cherng Talay Police received a call from the victim’s wife, Elena Yasen, at about 5:45pm. Rescue workers and police arrived at the house to find her unconscious.

“We had to revive her when we arrived. She strongly smelled of alcohol. There were dry blood stains and bloody footprints at the entrance and inside the house, and a key was found on the floor near the door,” said Col Sakon.

“The body of the victim, Vladien Yasen Lazo, 49, was sprawled on the floor in one of the rooms, with his chin perched on the edge of the bed. Mr Lazo’s feet were bloody, and there were some bruises on his back. We also found pieces of broken ceramic nearby.”

Rescue workers estimate that the victim had been dead for at least 12 hours. Officials have yet to release Ms Yasen’s statement about what happened.

“There was no sign of a break-in or robbery. We have called in specialists to investigate further. At the moment we cannot say whether this was an accident or something else,” he added.

“Ms Yasen accompanied her husband’s body to the hospital.”

The couple had been living in Phuket for almost two years, and ran a property company for Russian tourists and expats.