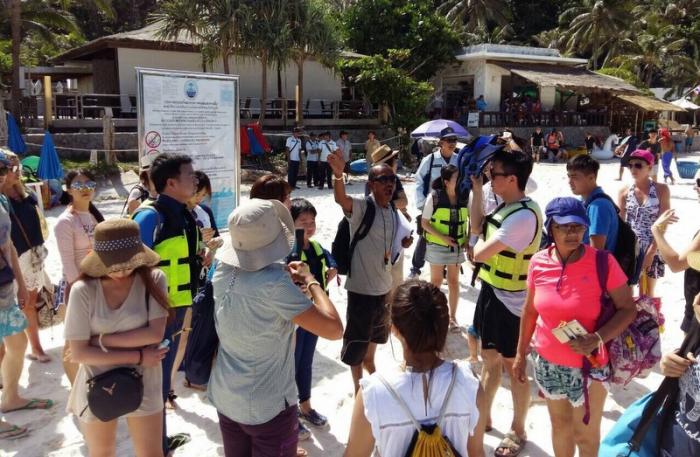 KOH RACHA: The Department of Marine and Coastal Resources (DMCR) has issued a ‘last warning’ to all tourists visiting Racha Island.

Signs explaining what constitutes illegal behavior have been set up Ao Patok, Ao Siam and Ao Tue, in Thai, English, Russian and Chinese.

The rules prohibit boats from dropping anchor when parked at Racha Yai Island, and visitors from
standing on coral; touching, collecting or feeding marine animals (including coral); and polluting the environment.

“All tour guides must first bring visitors to a central meeting point, where they will undergo an ‘orientation’ and be informed about these laws and guidelines,” said Suchat Rattanaruengsri, head of DMCR Region 6.

The move follows concerns raised by Koh Racha ‘conservationists’ about coral theft, after an Asian tourist was caught taking a bag full of coral on a boat bound for Phuket earlier this month (story here).

The DMCR responded by approving a 300,000 baht budget for environmental preservation in Koh Racha, which was used to install 15 new buoys and sets of artificial coral.

“Racha has been facing too much harm – it’s time to protect and restore our natural environment. We are doing our duty in accordance with the orders of Princess Sirivannavari Nariratana and Princess Sirindhorn, to restore and protect marine life from both natural and man-made damage,” said Mr Suchat.

On Wednesday, locals reported a Chinese tourist for catching and keeping two little fish at a beach on Racha Island, leading to his arrest and detainment for two days without bail (story here).

Employers of drug suspect issue statement after his arrest