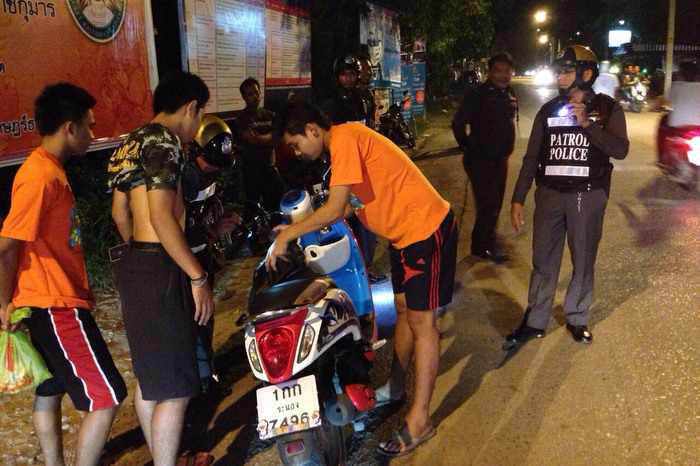 PHUKET: Police have ramped up street patrols and checkpoints, but say there is little more they can do to combat a spate of knifepoint robberies in Rawai within the past month.

“They are targeting Thais and foreigners – anybody they think looks weak and would be an easy target,” said Chalong Police Superintendent Krittapas Dazintharasorn.

In the most recent robbery, July 18, three teens overtook a British man on a motorbike as he rode down Soi Samakkee 2, and pressed a knife to his stomach as they grabbed his shoulder bag and motorbike keys.

Two weeks before, on July 3, an American friend of Mr Stark’s was slashed during an attempted robbery near the Roxanne Bar.

Driving home at about 5am after watching a World Cup match, the man was blocked by six men on two motorbikes who demanded his valuables. Having a powerful bike, he accelerated and managed to escape the group, but received a superficial knife wound on the shoulder.

“We are doing our best to patrol the area, and have set up checkpoints to search for drugs, weapons and other illegal items, but we simply don’t have enough officers to do anything more,” said Col Krittapas.

Most of the thieves are teens, Col Krittapas said, on average, 14 or 15 years old.

“We arrest them, but they’re released right away, because the judicial focus for minors is on reform, not punishment,” he said.

Col Krittapas blamed the teens’ parents for not overseeing them properly.

“These teens are not in school,” he said. “Some are drug users who rob [people] to get money to buy drugs. They ride around on motorcycles looking for victims, and target women and anyone who looks vulnerable.”

Col Krittapas appealed to local businesses to help keep an eye out for suspicious or criminal activity.

“Please don’t think this doesn’t concern you,” he said. “One day it could be you or a friend of yours.”

Col Krittapas asked bars and guesthouses in particular to monitor their surroundings and asked callers to report illegal activities in Thai.

“Our officers don’t speak English well. We have some police volunteers who can speak English, but most work only during the daytime,” he said.

Col Krittapas urged everyone to protect themselves by avoiding dangerous and poorly lit areas.

He also threatened that parents may be found liable if their children were caught out after hours.

Juvenile crime is the most serious problem Phuket faces, Chatree Taveesup, director of the island’s Juvenile Observation and Protection Center, said in March.