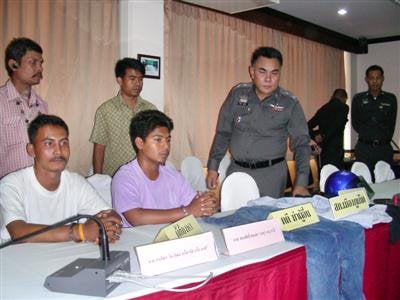 RASSADA: Phuket City Police yesterday morning announced the arrest of a man who confessed to the murder of his former boss at Supercheap on the bypass road on Tuesday night.

Most of the details of the arrest were read out to the press in a statement by Phuket Governor Niran Kalayanamit.

The body of the victim, 34-year-old Supercheap employee Kanya Boonprajong, was found just after 8 pm lying next to her motorcycle along the northbound lane of the road, north of Tesco-Lotus and not far from the Phuket Namsaeng Rice Company.

She had died of a single shotgun blast to the chest.

K. Kanya’s husband, an employee of Mission Hospital who was driving past at the time, recognized his wife’s motorcycle and stopped. He cried as he hugged her lifeless body, which was later taken by Kusoldharm Foundation rescue workers to Vachira Phuket Hospital.

Using eyewitness accounts, police at about 11 pm tracked down the alleged shooter, 31-year-old Korapat “Gus” Winnawat, to a rented home on Songkhla Rd, near the intersection with Yaowarat Rd in Samkong, where he was living with his in-laws.

Police said Gate confessed to helping Korapat dispose of the murder weapon, a homemade pistol designed to fire a single shotgun cartridge, in a shallow drainage ditch behind their home.

He has been charged with one firearms violation and for hindering a police investigation.

Police collected as evidence from the home a single 12-gauge shotgun cartridge, the clothes the suspect was wearing at the time of the murder and the Honda Wave motorcycle believed to be used in the killing.

Korapat planned the murder in advance and called the victim to ask her to meet him where the shooting took place, saying he wanted to “clear the air” over a previous dispute, police said.

Witnesses saw the couple meet, get off their motorbikes and begin arguing. Korapat then kicked Kanya to the pavement and stomped on her several times before drawing his weapon, firing it at close range and fleeing on the motorbike, police said.

Korapat answered “no” when asked if there had been any romantic involvement with the victim, as was reported by one Thai language newspaper.

He was motivated to kill Kanya out of revenge for incidents that took place several months ago while he was working under her as an employee at Supercheap, a position he eventually had to resign from, he told police.

Korapat has been charged with premeditated murder and one charge related to illegal possession and use of a firearm.

He also admitted that he was drunk at the time of the attack, police said.