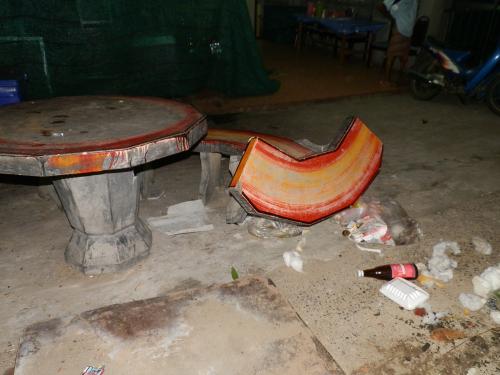 PHUKET: Phuket Police are on the lookout for the driver of a Toyota vehicle – make and model unknown – that slammed into a motorbike repair shop in Thalang early yesterday morning.

The driver reportedly backed his vehicle out of the shop and fled the scene, leaving behind as evidence his front bumper and the Toyota logo badge usually found fixed to the front of vehicles.

Thalang Police were notified of the accident in Baan Lipon at 2:15am, and when they arrived a crowd had gathered on the street to view the damage, said Maj Kittiphum Tinthalang.

“The car had smashed a concrete bench, a trash bin, damaged a motorbike with a sidecar parked in front of the shop and brought down the wire mesh screens at the front of the shop,” he said.

Kritsana Krailerd, the 37-year-old shop owner, was woken by the sound of the impact.

“At first I thought it was a car accident in front of my shop, but when I came out to see, my shop was in ruins. The screens was smashed and the car had damaged my customers’ vehicles,” he said.

“I didn’t see the vehicle at all. I don’t know if it was a pickup truck or a car,” Mr Kritsana said.

Police found a Toyota badge in the grass nearby and parts of the front end of the vehicle involved in the impact, indicating to police the vehicle was white in color.

“At this stage we believe the driver might have been drunk or had fallen asleep at the wheel, but so far we have not identified any suspects” Maj Kittiphum said.