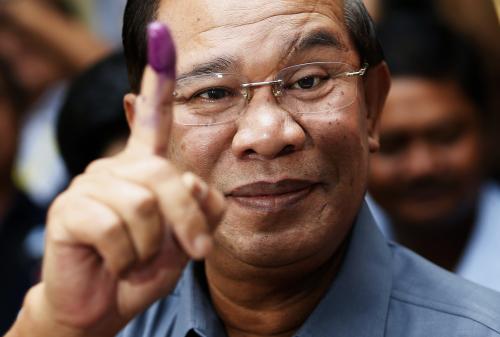 Khieu Kanharith, who is also information minister, gave the figures on his Facebook page and said it was the final count. The National Election Committee (NEC) has not published figures but was expected to give a partial count later in the day.

Sam Rainsy, leader of the opposition Cambodia National Rescue Party (CNRP), said earlier his party had won the election but then withdrew the statement. No explanation was given.

Backed by a compliant media and with superior resources, the CPP was confident of victory, but analysts had said the recent merger of the two main opposition parties plus the return from exile of Sam Rainsy could lead to a reduction in its majority.

If the figures given by Khieu Kanharith are confirmed, they would represent a significant gain for the opposition and a setback for Hun Sen, who has served as prime minister since 1985.

The CPP had 90 of the 123 seats in the outgoing parliament and the parties that united to form the CNRP had just 29.

While not formally accepting defeat, Sam Rainsy was conciliatory and called for calm.

“We want to thank all Cambodian people … regardless of their political affiliation, Cambodians who support all political parties, for their dignified participation in this election, for their contribution to make democracy move forward,” he told a news briefing.

He appealed to his youthful supporters not to cause any trouble: “We call for peace and reconciliation.”

Earlier, in a highly charged atmosphere after the end of polling at 3 p.m. (0800 GMT), an angry crowd set fire to a car outside one polling station in the capital and some smashed up police cars, a Reuters photographer said.

Military police blocked off a road leading to the home of Hun Sen, who has been in power for 28 years, and one going to the offices of the CPP and the NEC.

Voting, like the campaign itself, was generally peaceful although some trouble was reported in various places, mostly involving people complaining about irregularities.

Sam Rainsy’s party had alleged electoral lists were manipulated to give the CPP more votes and also complained about the disruption of meetings plus campaigning by the security forces for Hun Sen.

“The partisanship of the military and police has created an intimidating atmosphere for voters in many parts of the country,” U.S.-based Human Rights Watch said in a statement ahead of the poll.

Before his royal pardon, Sam Rainsy had faced a jail sentence handed down in 2010 for spreading disinformation and falsifying maps to contest a new border agreed with Vietnam, charges he called politically motivated.

He returned too late to register to run in the election, or even to vote, and the electoral authorities rejected his late request to do so.

But the charismatic former finance minister had attracted large crowds to rallies and appealed to younger voters with no memory of the turmoil before the authoritarian Hun Sen helped restore stability.

At one polling station set up at a pagoda in Phnom Penh, 29-year-old Khat Sreynit said she wanted a better country and jobs for university graduates. “And also that people have a living wage,” she said, before rushing into the crowd to get a glimpse of Sam Rainsy, who had turned up there.

A 70-year-old voter clutching an ID card declined to give her name but said: “This election is important for the country. I have always voted before, since 1993, I voted for living conditions and the country.” She paid little attention to Sam Rainsy’s arrival.

The United Nations organised an election in 1993 that put Cambodia on a rocky path towards stability after decades of turmoil, including the 1975-79 “Killing Fields” rule of the communist Khmer Rouge.

Under Hun Sen, a former junior commander in the Khmer Rouge who broke away during their rule, Cambodia has been transformed into one of Southeast Asia’s fastest-growing economies, helped by garment exports plus aid money and investment from China.

But economic growth has been accompanied by a rise in social tension over poor factory conditions and rural land rights in a country of 14 million where a third of the people live on less than 65 U.S. cents a day.


At least 36 dead after coach plunges off viaduct in Italy
Reuters / Phuket Gazette
PHUKET: At least 36 people died after a coach plunged more than 15 metres off a viaduct in southern Italy on Sunday, a spokesman for the fire service said.

Eleven people were pulled out alive from the stricken coach and taken to hospital, some with serious injuries, the spokesman said.

Rescue operations are ongoing, he said.

The coach was carrying about 48 people back to Naples after visiting Telese Terme in the southern region of Campania, Italian daily La Repubblica reported.

“The situation is dramatic,” the spokesman for the fire service said, adding that several other vehicles were also involved in the accident.


Driver of derailed Spanish train charged with 79 counts of homicide
Reuters / Phuket Gazette
PHUKET: The driver of a Spanish high-speed train that derailed and killed 79 people was released pending trial on charges of reckless homicide, a judge ruled on Sunday night.

Francisco Garzon, 52, had been under arrest since Thursday. He is suspected of driving the train too fast through a tight curve on the outskirts of the northwestern Spanish city of Santiago de Compostela.

Examining Magistrate Luis Alaez formally charged Garzon with “79 counts of homicide and numerous offences of bodily harm, all of them committed through professional recklessness,” the court said in a statement.

In a closed-door hearing before Judge Alaez, Garzon admitted taking the curve too fast, blaming it on a momentary lapse, according to media reports.

Alaez set the following conditions of release: Garzon must check in regularly with the court, surrender his passport and not drive trains.

None of the parties in the case, which include state train operator Renfe, state railway firm Adif and two insurance companies, had asked for Garzon to be jailed pending trial, and he was not seen as a flight risk, the court statement said.

At 8:41 p.m. on Wednesday the eight-carriage, high-speed train slammed into a concrete wall, crumpled, and some of the cars caught fire. The impact was so strong that one of the carriages was thrown several metres high over an embankment.

The death toll from Spain’s worst train disaster in decades rose to 79 after one injured person – a woman from the United States – died on Sunday.

Seventy people remain hospitalised with injuries from the crash, 22 are in critical condition.

Garzon has worked for Renfe for 30 years, 10 as a driver. His father also worked on the rails and he grew up in Renfe-owned housing in the northwestern town of Monforte de Lemos and went to scho