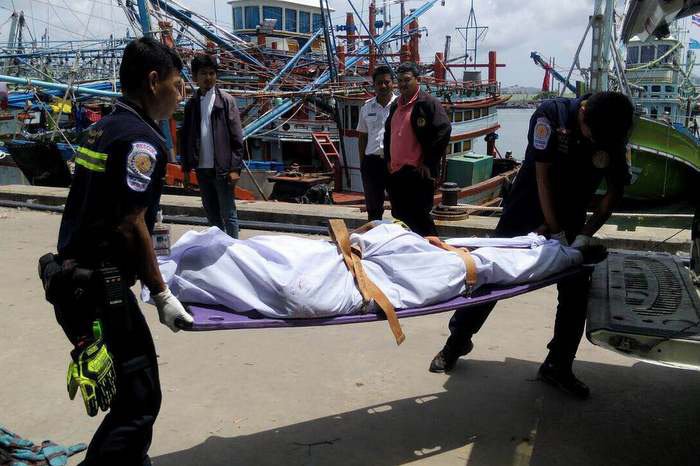 PHUKET: Police have launched a murder investigation after an unidentified man was found dead with a deep cut on his neck near Rassada Pier on Tuesday morning.

Police and rescue workers went to the scene, on the road behind the office of the Phuket Fishing Market Organization, and found the shirtless body covered in a blanket and a towel.

“The man had a very deep cut just above the shoulder blade,” said Capt Akkaradet Pongprom of the Phuket City Police. “However, there were no blood stains at the scene.”

There were no identifying documents with the body. The man appeared to be about 30-35 years old, 170 centimeters tall and weighed about 70 kilograms, with short hair and a beard.

At this stage, police believe the man was killed somewhere else, possibly on a fishing boat, and his body was dumped behind the road.

“We questioned fishing crews on the docked boats, but no one could tell us how the body ended up here,” said Capt Akkaradet.

“No one heard an argument either. Nothing seemed odd until someone came out and found the body.”

Police think the man had been dead about six hours before his body was found. The body was taken to Vachira Phuket Hospital for further examination.

“We will continue to investigate this case,” said Capt Akkaradet.