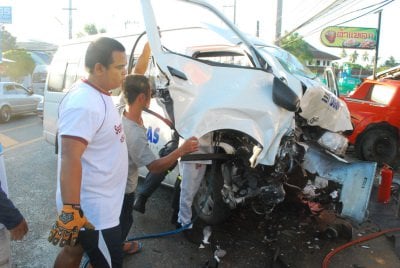 “He is to present himself at Chalong Police Station on Thursday [today] to be charged with reckless driving causing death,” Sub Lt Kraisorn Boonprasop told the Gazette on Tuesday.

“I have told Tuan Russala and the tour company [that he worked for] to make sure he presents himself. If he doesn’t, we will issue a summons for him,” Lt Kraisorn said.

Tuan Russala was released from hospital on Monday after recovering from injuries sustained in the head-on collision with a pickup truck taking children to school.

Although the tour van involved in the accident was painted in Pegas Touristik white and featured the company logo, it was also marked as belonging to Apitchaya Destination Co Ltd.

Meanwhile, police have publicly identified the tour bus driver who fled the scene after he killed two women who were riding a motorbike in the northbound lane of Thepkrasattri Road on November 14.

“The suspect is still at large. We have issued a warrant for his arrest for the charge reckless driving causing death. That warrant has been distributed to every police station in the country,” Capt Patiwat said.

Mr Narong fled the scene of the crash, leaving behind a tour bus that was also painted in Pegas Touristik white and featured the company logo, but was owned and operated by a different, independent, company.

Capt Patiwat confirmed that the bus company provided the name of the driver to police. However, Capt Patiwat declined to name the company that owned and operated the bus.