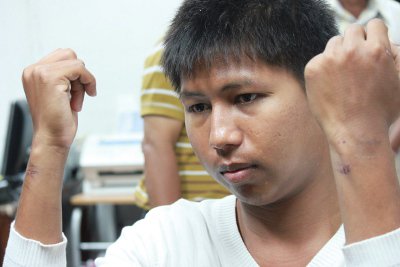 PHUKET: A man who claims his nephew was severely beaten by five Thalang police officers trying to extract more information after they had arrested him for drug possession has filed a complaint at the Phuket Damrongtham Center (ombudsman’s office).

Prapakorn Waharak, a 20-year-old Thalang resident, was accompanied to the Damrongtham Center at Provincial Hall yesterday by his uncle Prapan Waharak, 40, who filed the complaint against the Drug Suppression officers at Thalang Police Station.

Mr Prapan, who has a jet-ski operation at Naka Island, told Prapan Kanprasang, head of the Damrongtham Center, how his nephew Mr Prapakorn came to be badly beaten allegedly by the five officers.

“The incident occurred on August 22 around 3pm when my nephew was arrested near an Ao Por Seafood Restaurant in Pa Klok for possession of ya ice [crystal methamphetamine],” explained Mr Prapan.

“The police officers said they had been informed of drug dealing in the area. They said they found my nephew with two teenagers, all of them with ya ice in their pockets. They arrested all of them,” he explained.

The officers searched Mr Prapakorn and found 2.47 grams of ya ice in his trouser pocket. They handcuffed him and took him to Bangrong Police Box for questioning, Mr Prapan said.

“Once we arrived at the police box, they asked where I bought the drugs from. Then they just started beating me. I was pushed to the floor on my stomach and kicked and stomped upon. I felt a kick to the right side of my face and being stomped upon on my back. I was even hit with a club. One policeman took a plastic bag and covered my face,” Mr Prapakorn alleged.

“In the end I told them that I got the drugs from a man known as ‘Bang Plu’. He had told me to meet him near a seafood restaurant.

“My uncle took me to Thalang Hospital and they transferred me to Vachira Phuket Hospital where I was hospitalized for two days,” he said.

Mr Prapan and Mr Prapakorn went to file a complaint at Thalang Police Station on August 23.

On August 24, Mr Prapan returned to Thalang Police Station to post bail for his nephew with 300,000 baht as well as the title deeds to several properties.

“They said they would investigate the incident. However, I haven’t heard anything from them so I decided file the complaint here at the Damrongtham Center,” said Mr Prapan.

All safe after Phuket speedboat capsizes in rough seas