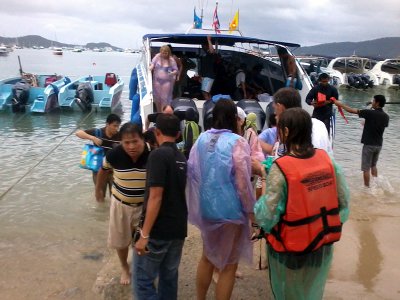 PHUKET: The Phuket Marine Police have confirmed that none of the tourists or crew on board a speedboat that capsized in the heavy seas off the coast of Phi Phi Island are missing.

The 24 Chinese tourists on board the boat, Luk Pradu 26, arrived at Chalong Pier late this afternoon.

Seven of them had suffered minor injuries and were taken to Phuket International Hospital for treatment.

Lt Jeerayuth Onthong of Phuket Marine police explained to the Phuket Gazette that the boat capsized about four nautical miles from Phi Phi Island, leaving crew members and the 24 tourists in the rough waters.

Krabi and Phuket Marine Police responded to distress calls, while other speedboats in the area were able to render assistance and rescue all on board.

One of the tourists, Ms Yuepen, said she and her fellow tourists were in the water for an hour and 20 minutes before being rescued.