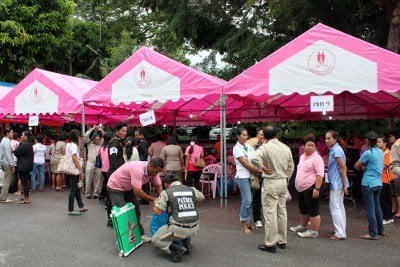 Khon Baan Rao, meaning “People from Our House” and led by PPAO President Paiboon Upatising, lost six of the 19 seats the party contested. The remainder were won by independents, who had a healthy showing with 37 independent candidates contesting the 24 seats available.

The heavy rains on Sunday may have played a part in fewer voters than expected turning out at polling stations to cast votes, said PPAO Chief Administrative Officer (Palad) Manop Leelasuthanon.

“We have yet to receive any complaints of any candidates breaching election laws,” Mr Manop said.

The preliminary results for all seats were: