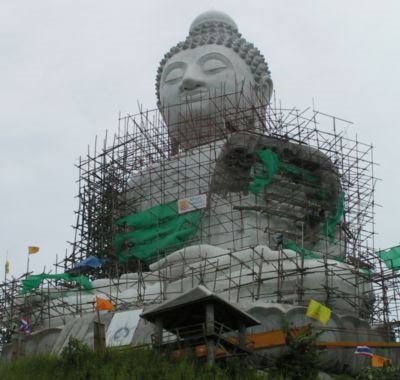 PATONG, PHUKET: The Phuket Provincial Energy Office plans to build windmills in the Nakkerd Hills near the ‘Big Buddha’ image, a seminar on alternative energy was told on Thursday.

Phuket Energy Office chief Jirasuk Tummawetch made the announcement during the seminar, held at the Royal Paradise Hotel in Patong.

As a tourist destination, the Energy Office wants to increase renewable energy production on the island using such technologies as wind turbines and waste-to-energy production, Mr Jirasuk said.

This would also help reduce the waste disposal crisis Phuket is now facing, he said.

As part of its ‘Phuket Green Energy Project’, the Energy Office hopes to erect wind turbines in the Nakkerd Hills by 2012

The nine turbines would be located in hilltop areas, two near the Mingmongkol Buddha image and seven more on Radar Hill, he revealed.

The locations were chosen because they are at high elevation with steady winds and offer the ideal aspect for turbine placement.

However, more study needs to be conducted to determine if the average sustained winds there justify the large initial investment that would be required, he said.

“We have already asked for a wind meter from the Ministry of Energy. It will probably arrive after October 1, when fiscal year 2010 begins, perhaps in November or December.

After it arrives the wind meter will record wind speed and direction for a full year, after which time the data will be thoroughly analyzed, he said.

The wind meter will be installed in the parking area of the Mingmongkol Buddha image, where it will reach a towering height of 90 meters, making it about twice as high as the Big Buddha.

The Mingmongkol Faith 45 foundation that built the “Big Buddha” and now oversees the area has agreed to allow the wind meter to be constructed there, he said.

Although the wind meter will drastically alter views of the island’s most massive icon, the foundation has agreed to allow it because the production of clean energy will benefit the people of Phuket, he said.

Private firms could profit from the sale of the electricity produced, he said.

However, a great deal of research and planning is still needed before the project becomes a reality, he noted.