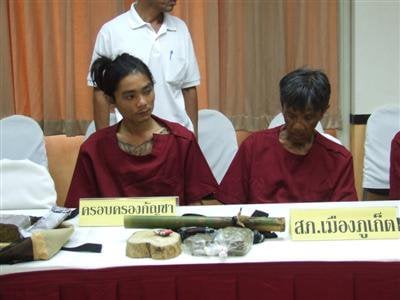 PHUKET CITY: Police reported a rise in arrests for prostitution in Phuket during August 2009, with 164 arrests representing a 70.8% increase over the same month last year.

Statistics for August released by the Phuket Provincial Police show that drug-related offenses were the most common crimes, with 208 people arrested in 179 cases.

There were also 32 arrests for involvement in the underground lottery, statistics for which are tabulated separately.

Among the contraband seized in the drug arrests were 5,438 ya bah (methamphetamine) pills, 12.8 grams of ya ice (crystal methamphetamine), one kilogram of marijuana and 31 kilograms of krathom leaves, a native plant used as a stimulant.

Phuket Provincial Police Commander Pigad Thantipong told a press conference last Wednesday that there has been an increase in the transport of 1-kilogram bars of dried, compressed marijuana onto the island.

Most of it is sourced from the north of Thailand and sold locally at prices ranging from 15,000 baht to 25,000 baht per kilogram, he said.

The increase is likely due to the fact that the high season for tourism is approaching and there will be an increase in demand from foreign tourists, he suggested.

There were four premeditated murder cases in Phuket last month, one more than August 2008, according to statistics.

Investigations led to arrests in three of the four cases.

There was no cases of manslaughter reported.

Of these, there were seven reports of motorbike theft, with arrests in six cases.

There were also two arrests in two snatch-and-run cases, down from August last year.

There were 14 cases of embezzlement reported, with no arrests.

From October to August this year, there were 34 premeditated murders reported in the province, a decrease of 22.7% year-on-year.

There have been arrests made in 61.8% of the cases, the police say.