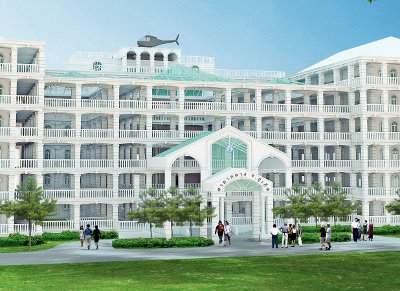 PHUKET: Plans to spend 450 million baht on a new Phuket Provincial Hall took a leap forward this week with the announcement of official approval to clear the 14-rai site on the corner opposite the current building (click here for map).

Construction of the new center of administration for the island is hoped to begin next year.

Years in coming, the plans aim to provide a modern facility to replace the current building, which is already 103 years old and under the responsibility of the Ministry of Culture as a standing legacy of Phuket’s heritage.

Also to be removed are the tennis courts that have proved very popular with Phuket Town residents.

Under the same project, Sanam Chai, the popular public football field located on the 14-rai site, will be developed into green open area that will be used to host public events, explained Mr Nonthasak.

“So it will take three years to complete the construction,” he added.

“We expect to receive the first installment of budget by about April next year. Officers have until December to complete the design plans.

“Then, from January to March, we will complete the government tender process to select a contractor and then starting building the new provincial office,” said Mr Thawee.

“The current Provincial Hall building is already listed with the Fine Arts Department. After the administration moves to the new building, we expect the old building to be converted into a museum depicting Phuket’s history,” said Mr Nonthasak.

Phuket orphanage gets bikes from Quest