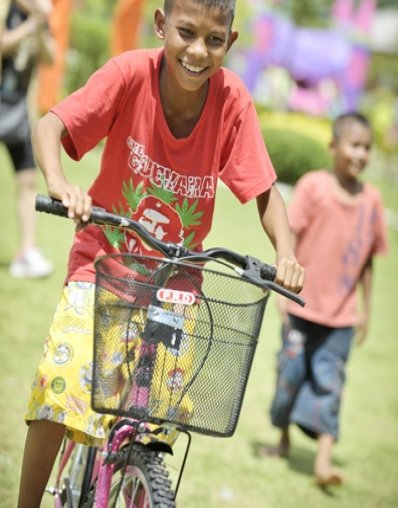 Over 210 senior management and staff of the Singapore-based Swiss bank took time out from their recent conference in Phuket, to spend a morning at Baan Sosa Orphanage in the Quest program – dubbed the “Great Bike Build.”

They were split into teams to work on problem-solving tasks and issued with bike parts, which they later assembled into mountain bikes with the help of a professional bike technician.

Twenty completed bikes were then handed over to the youngsters, together with a donation of 125,000 baht to the orphanage.

“This was probably the most powerful program we have ever operated,” said Alun Gathergood, Quest regional manager. “It was an emotional experience for everyone concerned and some tears were shed at the handover.”

The bank is also providing 26,550 baht to sponsor teams of Baan Sosa Orphanage youngsters in the Phuket Ironkids triathlon to be held on December 1, when some of the bikes will be used, as well as providing all their racing kit and equipment.

The “Team Sosa” youngsters are now being coached by Quest for the race.

Baan Sosa Orphanage is home to 120 orphaned children aged from four to 16 years old and is one of five orphanages in Thailand administered by the Australian-based SOS Foundation and supported by Thai Royal Family patronage.

Phuket-based Quest, Asia’s leading and most innovative corporate team building organization, also offers programs on the Indonesian resort island of Bintan near Singapore and is poised for further expansion throughout the region.

Quest will be managing team-building operations at the new Laguna Lang Co resort in central Vietnam, due to open later in 2012. Its head office is at Laguna Phuket, where it has been operating since 1995.