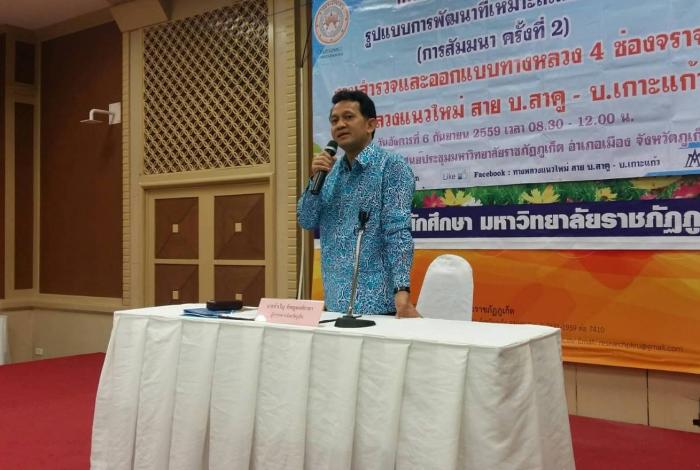 PHUKET: Governor Chamroen Tipayapongtada announced on September 6 that preliminary plans for a proposed 12-lane highway running the length of the island have been approved and may be completed by 2022.

Although the exact route of the proposed superhighway has not yet been decided, the 22 kilometer project would reportedly start 1km away from Phuket International Airport and extend to the Premium Outlet mall in Koh Kaew at a cost of 15 billion baht.

Governor Chamroen said the proposed highway is necessary to accommodate Phuket’s future growth. “We hope to raise the standards of roads and infrastructure in Phuket to a world-class level,” said Gov Chamroen. “This road will help alleviate traffic rush hour on Thepkasattri Road and reduce the number of accidents. The highway will also be able to handle the increasing number of vehicles predicted to be on Phuket’s roads in the next 10 to 20 years.”

“Phuket’s high economic growth rate and opportunities compared to the south of Thailand continue to drive migration to the island, while the tourism industry continues to follow an upward trend in the increasing number of visitors, said the governor, adding that the main thoroughfare of Thepkasattri Road is already stretched beyond capacity with about 80,000 vehicles using the road each day. That number is expected to reach at least 100,000 vehicles within the next few years.

“Traffic jams are a regular occurrence on Thepkasattri Road. They increase the instances of accidents and impact the response time for emergency vehicles using the route,” he said.

It is not yet clear how land owners along the route are to be compensated. However, properties are to be categorized as commercial, residential and as rubber tree plantations.

“Initially there were three different blueprints of the proposed highway,” Mr Seksit told the Phuket Gazette. “We have chosen the option that will take care of traffic from both Phuket International Airport as well as that coming from Sarasin Bridge.

Mr Seksit said that the chosen project team will mull over their plans during the fifth public hearing, and finalize everything by April 2017. Construction is scheduled to begin some time next year so it can be completed by 2022.