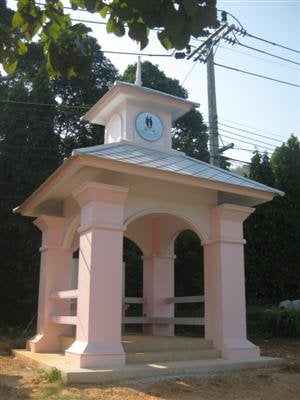 Mr Paiboon, whose campaign color was pink in the last election, said the gazebo-like structures – known as sala  in Thai – were aimed at keeping tourists dry.

“The pavilions are there for the convenience of tourists waiting for public or private transport to the beach, Thalang or the airport,” he said.

Not the bright purplish pink of the fleet of Phuket City buses rolled out last year, the pavilions are painted a more subdued combination of salmon pink and what might be described as ‘eggshell’.

There are three designs, all branded with the PPAO’s official ‘Two Heroines’ logo.

Mr Paiboon said he also planned to have more than 100 bus stops for public and private bus passengers built by the middle of this year.