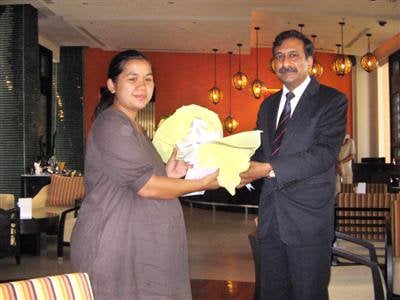 Ms Jirachat was one of six Thais working as spa therapists at the Banyan Tree spa in the Trident Oberoi Hotel in Mumbai when the terrorists broke in and opened fire. She died of a bullet wound to the head.

Ms Jirachat was the only Thai casualty of the attacks that killed 184 people, including 26 foreigners from 14 different countries, according to Indian government figures.

Representing India at yesterday’s event was Umesh Kumar, defense adviser to the Indian Embassy in Thailand.

At the event, held in the 98º Lounge at the Millennium Resort in the Jungceylon complex, Group Captain Umesh presented Ms Jirachat’s elder sister Omjit and her family with a bouquet of flowers and a check for 140,000 baht on behalf of Indian Prime Minister Manmohan Singh.

Ms Omjit, now pregnant with her third child, lives in the Phuket Villa Suan Luang housing estate in Phuket Town. She is the only surviving member of Ms Jirachat’s immediate family.

Her family was also provided with 350,000 baht in March last year.

A press release distributed at the event read as follows:

“On behalf of the Indian government, the people of India and the Indian embassy, Group Captain Kumar conveyed to the family of the late Ms Kanmanee our heartfelt condolences once again and assured them of India’s determination to make every effort to ensure that the perpetrators of this heinous crime against humanity are brought to justice….The terrorist attacks on Mumbai in November 2008 were a barbaric act of wanton violence, not only against India but against all humanity.”

Weeraphol Choochart, Ms Omjit’s partner and Ms Jirachat’s brother-in-law, said the family was grateful to the Indian government and the Banyan Tree for their financial assistance and for returning Jirachat’s body to Phuket for cremation services that were held at Chalong Temple on December 6.

Before her death, Ms Jirachat was planning to return to Phuket over the following Christmas holidays.

Mr Weeraphol, who works for the Phuket office of the Justice Ministry, said he wasn’t worried about a similar terrorist attack taking place in Phuket because “…the Thai people are unified and at peace.”

PHUKET OPINION: A prescription for injustice