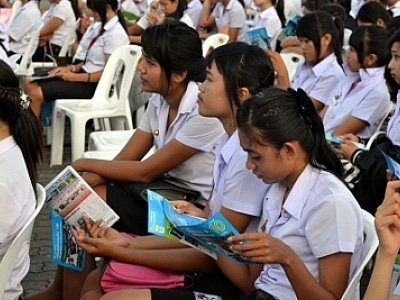 PHUKET: Students at Phuket Vocational College rate job security and sustainable development of Phuket’s tourism industry among their top criteria in selecting which candidates to vote for in Thailand’s general election next Sunday.

About 300 students from the college on Thursday attended a rally at Saphan Hin, where the three candidates contesting Phuket Constituency 1 urged the students to exercise their right to vote.

For most of the youngsters, this is the first general election they are eligible to vote in.

“Some students don’t watch the news on TV or pay attention to politics, but the speeches today highlighted how politics and the election affect their lives and the advancement of our country,” said Prayong Manokwanhathai, 19.

He identified traffic and job security as his top concerns.

“Traffic in Phuket has become a severe problem that needs fixing. For jobs, students have high hopes jobs will be available for them after they graduate,” he said.

“I also want the government to focus on education because it is very important for the younger generation, including me,” he added.

First-time voter Noppong Petpoung, also 19, named illegal foreign tour guides as an ongoing problem that needs to be dealt with.

“When I did an internship, I learned there are a lot of ‘sitting guides’ in the tourism industry. This problem should be fixed,” he told the Gazette.

“Sitting guides” is the name commonly given to registered Thai tour guides who are relegated by tour companies to do no more than literally sit on tour buses while illegal foreign guides interact with tour group members in their native tongue.

“I am studying tourism management, so I want the government to help tourism. I want to see sustainable tourism. Phuket is a tourist destination. There should be a policy to conserve and recover the natural resources that we have been heavily relying on,” Mr Noppong added.

Both excited at the prospect of voting in their first election, they suggested some likely shifts in young voter behavior.

“This is my first time to vote, and this election is important to me. In the past two to three years, I have seen a lot of changes in Thailand’s politics,” said Mr Prayong.

He follows the policies put forward by each party and candidate and pays close attention to news reports and televised debates, he said.

“I also search the internet for information about proposed policies and the past achievements of each party. Finding out which has the strongest points allows me to decide which to vote for,” Mr Prayong explained.

Mr Noppong was likewise excited by the coming election.

However, he also indicated a shift away from traditional voting practices.

“Just because we live in the South doesn’t mean we have to vote for the Democrats. We have to consider whether or not these candidates and parties will follow up on their promises, or whether they are just saying things to get us to vote for them,” he said.

Aussie tourist jumps to his death in Phuket