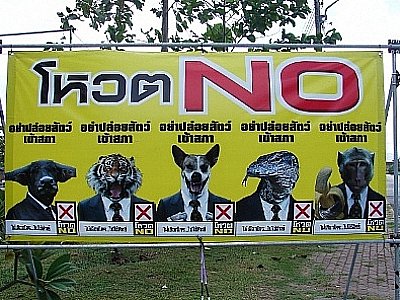 PHUKET: As Thailand’s general election draws near, one can only guess what tourists in Phuket might make of it all. So ubiquitous and impressive is the roadside pollution that many visitors will spend their holiday bewildered as to why they are looking at thousands of colorful images of suited monkeys, salivating dogs and fatuous monitor lizards.

For many, the preponderance of roadside billboards bearing images of the various contenders will just add to the kaleidoscope of attention-seeking signage that blights the ‘Pearl of the Andaman’.

One can only hope that after the voting canvassers will show the same vigor in collecting the signs that they did in putting them up, because our once-beautiful roadsides are quickly degenerating into elongated garbage tips.

This crass campaign propaganda, which has remained virtually unchanged in format for decades, is an insult to any thinking person’s sensibilities. One might think the overall effect would be to push voters to the “Vote No” option, but even proponents of that choice seem to lack the creativity needed to get their message across without trashing the landscape with crude and childish signage.

Of course election signs are just the latest wave in a tsunami of roadside junking in Phuket. It’s an unsurprising irony that the politicians, all of whom preach environmental preservation, are the folks responsible for the campaign trash – the very same people who are asking to represent us, to run our communities, and to preserve law and order.

Equally if not more ironic is the fact that the billboards bearing images of local VIPs imploring the public to take part in “Save the Planet” and “Go Green” campaigns (that took place over a year ago) now make up a considerable part of the colorful canvas detritus.

Canvassers (could there be a better word for them?) seem to know no boundaries when it comes to roadside erections. Phuket has been divided into two constituencies, but even that has not stopped the cheerleaders from throwing up signs supporting candidates outside the areas where those candidates are actually running.

Hopefully the Election Commission will address the campaign’s obvious support for roadside trash before the next polling. Let us not forget that elections in this country tend to come in spates.

It’s baleful that of the 40 parties contesting the election, not one has made environmental protection a sincere policy objective, and the current approach to campaigning, with billboards as the medium of choice, affords little basis for optimism on that front.

For those of us who can remember the Phuket of 20 years ago, the current blitz of environmental disregard is every bit as depressing as the choices on offer at the ballot box next Sunday.

Sunday Opinion: Our MPs need to leverage Thailand for the benefit of Phuket