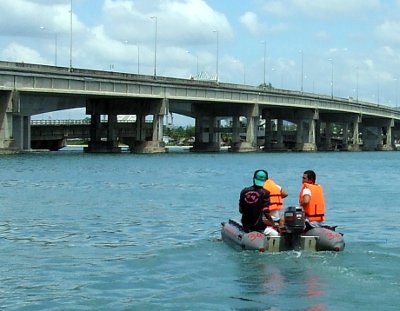 PHUKET: Rumors have surfaced that the “troubled lovers”, who were believed to have jumped to their deaths from Phuket’s Thepkrasattri Bridge last month, have been spotted together in Surat Thani Province, police said.

“I have heard rumors that the couple survived the jump and they are now living together in Surat Thani Province. I have no proof of anything, so I can’t comment on it. All I know is that the search has been called off,” said Tah Chat Chai Police Duty Officer Watcharin Jiratikarnwiwat.

The rumor appears to have started among communities living near the bridge, Maj Watcharin said.

Nattaphon Sitthiyanon, 25, and Chanokporn Aimauksorn, 27, were last seen driving their Honda sedan out of Tah Chat Chai checkpoint toward Phang Nga on October 28.

The car was later found abandoned halfway across Thepkrasattri Bridge, over the waters separating Phuket from the mainland.

The Chong Pak Phra Strait, as the channel is known, has a notoriously strong current that flows out into the Andaman Sea.

A Kusoldharm Rescue Foundation worker told the Phuket Gazette that the plug was pulled on the search-and-rescue effort after scouring waters in the area every day for a week after the couple’s disappearance.

“We started our mission as soon as the couple jumped off the bridge and we continued for a whole week, dedicating most of our time to this effort, but we never found the bodies,” the worker said.

During the search, numerous “spirit mediums” came forward to offer their assistance, each claiming to know exactly where the bodies were, but none proved accurate.

“I didn’t believe any of the spirit mediums. Every time we followed their advice, we didn’t find anything – I think it was a waste of time to rely on them,” the rescue worker said.

Maj Watcharin told the Gazette that, “As long as the couple haven’t presented themselves personally or the bodies haven’t been found, I can’t close this case.”