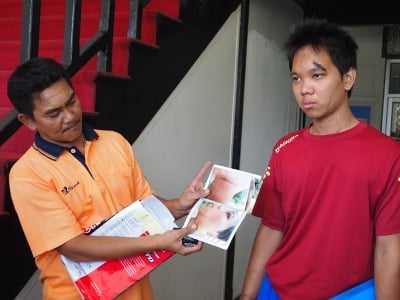 PHUKET: Police have launched an investigation into their own after a young man yesterday alleged several officers repeatedly beat him and produced false evidence after his arrest.

Chalermporn Keawmanee, 20, appeared at the Damrongtham Center [Ombudsman’s Office] yesterday alongside his father, Kaset Keawmanee – owner of NS Cable TV in Surat Thani – to request an investigation into events that allegedly took place on November 11.

Mr Kaset said his son was beaten by police in front of a house on Soi Hong Leng Uthit near Surakul Stadium in Wichit.

“I had come back from work and I couldn’t get into the house [on Soi Hong Leng Uthit, near Surakul Stadium] because there was no one there, so I sat on my motorbike and waited,” Mr Chalermporn said.

“As I was waiting, two policemen drove up in a pickup truck. They stopped and started asking me questions. I told them I lived in the house, but they didn’t believe me, so they asked me to shout for someone in the house,” he said.

He claimed that while he was shouting, one of the officers hit him in the abdomen, knocking the wind out of him, before putting him in a headlock and “poking him with something hard and injuring him”.

He said that he yelled for help as they handcuffed him and dragged him beside the house, where the officers searched him and found ya ice (crystal methamphetamine) smoking paraphernalia.

The police then escorted him in their pickup to Phuket City Police Station, all the while beating him, Mr Chalermporn said.

When they arrived at the police station, another officer hit on the back him three or four times with a club before setting him down in front of the jail where other officers took turns hitting and kicking him, causing a wound above his left eyebrow, he said.

Police took him to the hospital where he received nine stitches to his brow injury before returning to the police station where he was charged with possession of ya ice and resisting arrest.

However, Mr Chalermporn denies the charges, saying that he did not resist arrest and that he did not know where the 0.97 grams of ice he’d been charged with had come from.

He admitted to possessing the smoking paraphernalia and said that he had used all of his drugs before police encountered him sitting on his motorbike.

Phuket City Police Superintendent Chote Chitchai today said, “I need to investigate this case first. I’ve also been informed that a police officer went to the hospital to get a doctor’s certificate regarding some minor injuries sustained in the fight to be used as evidence.

“The officer informed me that during the arrest, Chalermporn attacked him and they both fought – I don’t know who started it, but the officer arrested Chalermporn because it’s his duty. I’ll investigate the case and find out the facts before I come to any conclusions,” Col Chote said.

“I will be fair to both sides – to the kid and the officers in question – as the kid has filed a complaint with the Damrongtham Center that the police officer acted inappropriately while arresting him. If the police officer has done wrong, he will face the law.

“As I know so far, the police were on duty to make an arrest in a drug case and the suspect fought against the police – the officer was also injured. As I said, both sides will be treated fairly and I will not take a side. We haven’t yet received a report from the Damrongtham Center, but as soon as we do, we will investigate.

“I always order police officers to strictly obey the law to prevent any trouble. Inappropriate behavior is unacceptable,” he added.

Phuket seafood prices to fluctuate regardless of wage increase