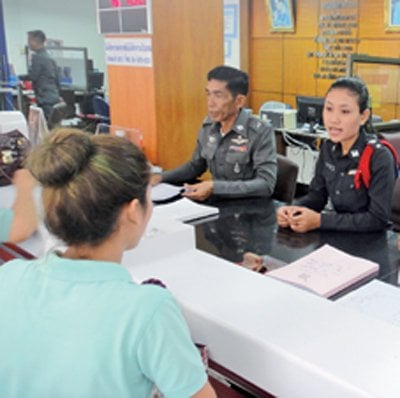 Despite having received no specialized training for dealing with traumatized women, who may have been violently abused or raped, Capt Nucharee is confident that her police training, character and experience is equal to the task. Another positive being that, as a women, she can empathize with the victims.

As reported previously by the Gazette, Phuket Provincial Police Commander Pekad Tantipong, informed the honorary consuls at their quarterly meeting, that he had appointed Capt Nucharee to investigate “sensitive” crimes, notably sexual abuse and rape against women.

“The official letter arrived about a month ago, however, as yet there have not been any sensitive cases that require my skills,” Capt Nucharee told the Gazette this week.

“Not only will I investigate rape cases, but also other cases where a victim doesn’t want to speak to a male police officer, such as domestic violence cases,” she said, adding that her remit extends to taking statements from the children of foreigners, a particularly difficult interviewing scenario.

However, in her new role she will only assist in such cases, not actually take over the role of lead investigator.

“I will only be interviewing the victims. Other aspects of the investigation, including the collection of evidence, remains the remit of the relevant police station’s investigating officers,” she said.

As with most policing agencies worldwide, there is a set procedure for crossing inter- departmental boundaries. The Phuket police are no different.

“Officers from police districts outside of Phuket Town will have to contact the Phuket Provincial Police chief, who will send a letter authorizing me to interview the victim.

“According to the regulations, I have to get the order from the commander before I can investigate cases in other jurisdictions,” said Capt Nucharee.

In reality the process will be much shorter. “A request for my involvement is likely to come by telephone. Cdr Pekad believes that the necessity of a formal letter before I can react is a waste of time. A formal letter requesting assistance can be a retrospective action.

“Also, if the incident occurs within the Muang Police District, no authority is needed,” she said.

Should a woman want to report a crime, but is reluctant to talk in front of male officers, she can request to speak with Capt Nucharee.

“The investigating officer will contact Cdr Pekad directly, who will task me to attend the investigation,” she said.

Capt Nucharee explained that such interviews are likely to be conducted at the police station where the complaint was lodged.

“However, I’m quite prepared to visit victims in hospital if necessary. Otherwise the victim will be interviewed in a private room with only those officers necessary. They might include another female officer and a translator provided by the prosecutor or a consul.

“I’m glad to help in these cases and now that we have a female officer dedicated to them I want women not to be afraid to report crimes,” she said.

Girls saved in Phuket, safely back in France