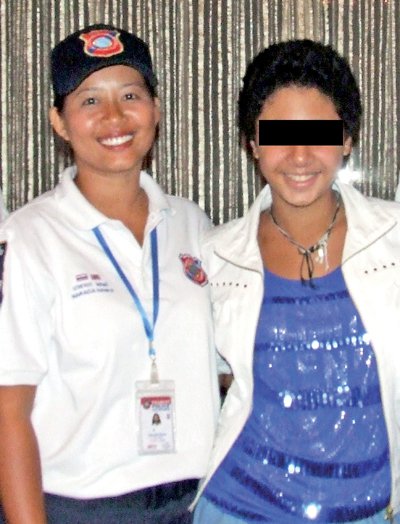 PHUKET: The two French girls who spent eight months on the streets of Phuket are now back in France, where they are undergoing evaluation by social workers.

The girls, 12-year-old Manel and her sister Chaima, 11, have been reunited with their paternal grandmother and are now in the care of French social services.

Meanwhile, the Gazette has been informed of the important role played by two Belgian men in securing the girls’ return to France.

One of the Belgians, who asked that his name be withheld, was at the Patong Police Station on November 18 for a drunk-driving offense when he met the father of the girls in a holding cell.

The father gave the Belgian his mother’s number and asked him to call her and inform her of the girls’ situation.

Back in Belgium, the man called the grandmother, and one of his own relatives living in the Nai Harn area, to ask for assistance.

Chaima was living in a Patong guesthouse, while the more independent Manel divided her time between Kamala in the day and Soi Bangla by night.

The grandmother wired the Belgian 20,000 baht to pay for unpaid hotel bills in order to get back the passports of the two girls, which were being withheld in lieu of payment.

He turned this money over to French Consul Pierre Blondel, who worked with Tourist Police to get the passports back. Chaima, her passport recovered, flew out in early December with the consent of her father, who signed a consent form from a Bangkok Prison.

Manel was finally spotted on Soi Crocodile by Tourist Police Volunteers on the night of December 8 and flown home a few days later. Both flights were courtesy of the French government.

The grandmother told the Belgians that she was furious with her son for squandering an inheritance of almost a million baht during his eight-month stay in Phuket and for neglecting his daughters.

The grandmother said she had no intention of sending him any more money. At last report he was still in a Bangkok prison cell, unable to come up with the funds to pay the court-ordered fine for his drug conviction.

“The mother won’t pay his return fare to Europe or anything else, so he could be in Thailand for a long time,” the Belgian said.