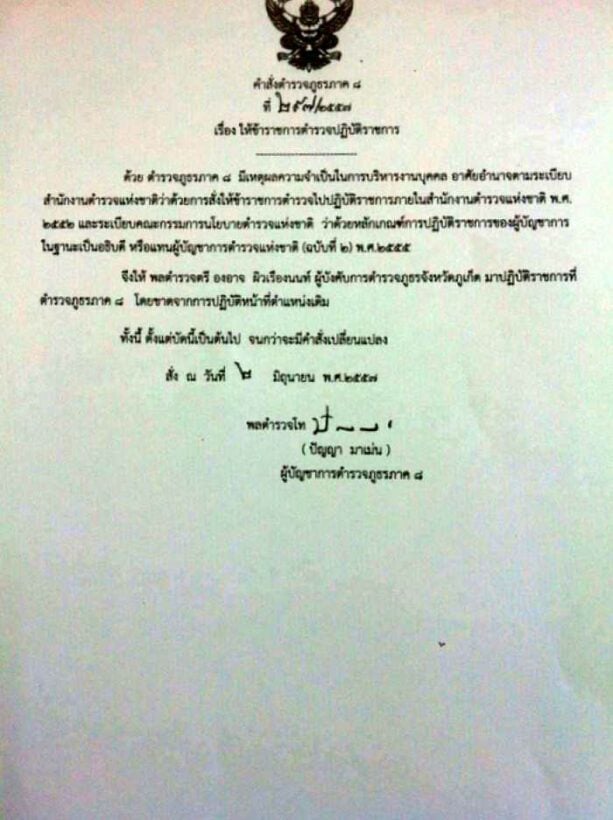 PHUKET: A deputy commander at the Royal Thai Police Region 8 headquarters in Surat Thani is to arrive in Phuket this morning to be installed as Phuket’s new top-ranking police officer later today.

Maj Gen Krajang Suwannarat was officially promoted to the post of Phuket Provincial Police Commander in an order promulgated yesterday.

“Maj Gen Krajang is to arrive in Phuket this morning so he can be officially installed in his new post this afternoon,” Phuket Provincial Police Deputy Commander Peerayuth Karajedee told the Phuket Gazette.

Gen Ong-art as late as yesterday morning was ordered to stay in Phuket, but by 1:20pm had received a phone call ordering him to report immediately to Region 8 headquarters (story here).

According to the official transfer orders, both signed by Police Region 8 Commander Panya Mamen, Gen Krajang was assigned the post of Phuket Provincial Police Commander while retaining his title as a deputy commander at Police Region 8.

The transfer order affecting Maj Ong-art specifically called for him to report for duty at Region 8 headquarters, and specifically noted that he was no longer commander of the Phuket Provincial Police.

Maj Gen Ong-art in his parting words to Phuket yesterday urged the his successor to keep an eye on officials committing extortion (story here).

“I do not want it to happen, as it will ruin the image of tourism in Phuket,” he said.

“I would also like to apologize to anyone I may have upset during my time here in Phuket.”