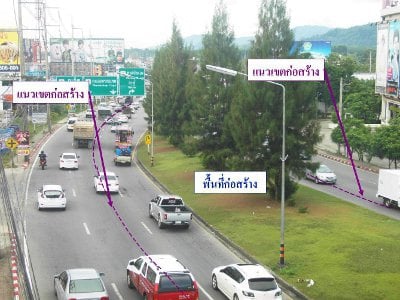 PHUKET: Motorists have been warned to expect major delays when construction begins next month on a 599-million-baht underpass at the Darasamuth Junction, on the bypass road near the Central Festival Phuket shopping mall.

Chavalert Lertchavanakul, Project Manager at the Department of Highways’ Bureau of Bridge Construction in Bangkok, broke the news at a meeting in Phuket to finalize areas of responsibility with local officials.

“The contract stipulates that the work must be completed within 720 days starting from the day after signing. I have been told that the Minister of Transport [Charupong Ruangsuwan] wants the contract signed before the next fiscal budget year begins on October 1, so we expect work to start next month,” he added.

The meeting on Wednesday, held at the Highways Department office in Phuket Town, was called to confirm which office heads in Phuket would coordinate with Ital-Thai in building the underpass.

Among the issues discussed were the relocation of utility poles and the installation of storm drains.

“The complete work plan for the project is to be unveiled on September 18,” Mr Chavalert said.

The project will extend 800 meters from beginning to end, taking 250 workers just under two years to build. The entire project would require about 50,000 cubic meters of concrete, he added.

In order to build the structure, the company will need to close both inside lanes on either side of the underpass, thus leaving only one lane each way open to traffic heading northbound and southbound.

“People who use that junction should avoid the area while the construction is underway. They should expect delays and use alternative routes if possible,” Mr Chavalert said.

Asked whether motorbikes and salaeng (motorbikes with sidecars) would be allowed to use the underpass, he said it was a matter for local authorities to decide.

Regarding flood prevention measures, Mr Chavalert said that three pumping stations would be installed inside the underpass.

Ital-Thai, Thailand’s largest construction company, built the recently completed Srisoonthorn Bridge that carries traffic northbound off the island. It has also been selected to build the mega-project port at Dawei in Myanmar at a cost of US$8.6bn, or about 268 billion baht.

Islanders shot down by Airforce United