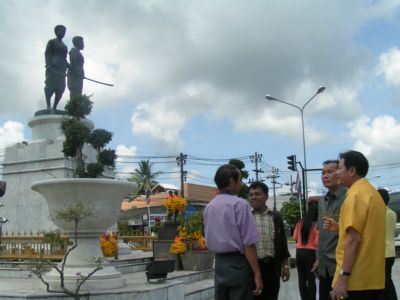 THALANG: After a nationwide spate of thefts and damage to important cultural and religious sites, Phuket Vice-Governor Worapoj Ratthasima yesterday paid a visit to Thalang National Museum to make sure its collection, for which the Fine Arts Department is responsible, remains safe.

Thalang Museum Curator Atjima Nukong told him all the museum’s items were accounted for and being properly protected.

After meeting with staff at the Thalang museum, V/Gov Worapoj and his entourage stopped to inspect the condition of the nearby Heroine’s Monument. Built in 1967, the statues of Thao Thepkrasattri and Thao Srisoonthorn were found to be in good condition.

The vice governor told the Gazette that he had asked for status reports from around the island about important statues and other objects. Although there were no reports of loss or damage, he called on the public to keep an eye out to ensure that important cultural artifacts remain out of the hands of smugglers and thieves.

People should report any such activity immediately to their local administrative body, he added.

Thalang Museum curator K. Atjima reminded tourists that it is illegal to take antiques such as Buddha images out of the country.

They must obtain a clearance certificate from the museum to take even replica antique items out of the country, she said.

So far this year, the museum has inspected some 100 items to determine authenticity, she said.

Last year, Customs officers at Phuket Airport seized 98 antiques or replicas from departing tourists who had neglected to have permits to take them out of the country, she said.

“We can’t allow authentic items out of the country and we confiscate any broken parts or fragments we find, regardless of how old they might be,” she said.

There are currently 68 shops registered to sell antiques in Phuket, and most of these co-operate well with the Fine Arts Department, she said.

However, she noted that a legal loophole that restricts her staff from seizing antiques at night has allowed some shops in Patong to subvert the law.

“This is a very serious problem with the law,” she said.

She also said she was worried about the ease with which antique items can be smuggled out of Phuket by boat.