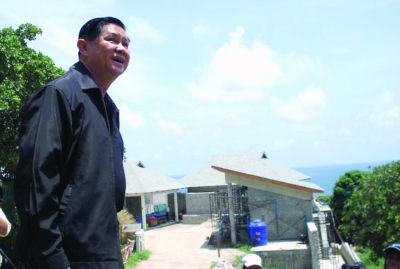 PHUKET: Gen Intarat Yodbangtoey, in his capacity as “special adviser” to Natural Resources and Environment Minister Anongwan Thepsutin, led an inspection tour on Sunday of properties believed to be illegally owned by virtue of their location on agricultural reform (SorPorKor) land. The properties are located on hillsides in Kamala, Kalim and Patong hillsides on Sunday.

On Saturday, Gen Intarat and his team inspected other building sites as well, including some on Koh Yao Yai in Phang Nga, which Forest Department surveys also show to be SorPorKor land, degraded public forest land intended for agricultural use by poor farmers.

At that meeting, Gen Intarat proposed a two-prong attack to reclaim public land for the state.

“The are two main types of encroachment: those squatting on public forest land to plant rubber, and [certain] cases where land titles have been [improperly] issued for public land,” he said.

However, for public land on which titles have been issued, Gen Intarat proposed that the government reclaim the land and restore it to its natural state as preserved forest.

“Land that local people have encroached on so that they can farm will be handed back to the Forestry Department and restored to natural forest, but other encroachers could face minimum jail sentences of 10 years,” he warned.

While ready to reclaim public land for which people may have government-issued titles, Gen Intarat left the door open for some plots to be developed for tourism by government offices and the local administrative bodies where they are located.

“For forestry land that can be used as a public park or a tourist attraction, we are pleased to support and protect our natural resources to support tourism in Phuket,” he said.

Aongart Chanachanmongkol, chief of the Phuket Provincial Office of the Ministry of Natural Resources and Environment (MNRE), reported that of the 339,396 rai that comprises Phuket, 108,581 rai is state forest land.

K. Aongart reported that so far this year, the Phuket MNRE office had discovered 23 cases of encroachment on state land: 15 cases in state forest, six cases in protected mangrove forests, and two cases of illegal logging.

Phuket Vice-Governor Worapoj Ratthasima proposed handling encroachment cases locally. “If any local [administration] organization discovers encroachment in their area, they can report it to the governor,” he said.

Also at the meeting was Monthon “Palad Rambo” Chartsuwan, the MNRE official responsible for investigating law-enforcement issues in the South.

“There are many cases of encroachment – about 20 construction sites – from Kamala to Kalim, and some in the outskirts of Patong, that the DSI will investigate,” he said.

“Around the nation, about 6 million rai of SorPorKor land has been encroached upon. That is a lot of land,” said K. Pongpayome, who served as Governor of Phuket from October 2000 until September 2003.

“Since 1997, we have taken legal action against 11 people in Phuket who had claimed 20 plots covering 500 rai. By the end of 2006, the Supreme Court had heard the cases against five of those people – and had decided against all of them, ordering 11 plots covering 300 rai to be returned to the state,” he said.

Among those who lost SorPorKor land under the Supreme Court rulings is current Phuket MP Tossaporn Thepabutr.

“Much of the SorPorKor land returned to the state is in Patong and Kamala, which are very beautiful areas. So I have come to Phuket to inspect those areas with the primary goal of protecting them against encroachment.

“I received a report from the Phuket governor that many local OrBorTor [tambon administration organizations] are ready to provide funds to develop their areas. We can develop the land for public use or allocate it for farming. It depends on what provincial officers decide to do with it. I will follow up on these issues later,” Pongpayome added.

Phuket’s antiques all present and accounted for