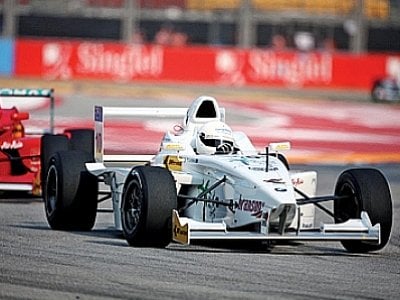 PHUKET: Atlantic Racing Team driver Dylan Young from Phuket proved his worth to sponsors and other supporters with a superb drive at the JK Racing Asia Series in Singapore recently.

Young finished Race One in 8th place and Race Two in 6th position, which gave the 22-year-old a double-points scoring finish for the weekend.

Under lights at the Singtel Singapore F1 circuit, Young posted the 5th fastest time for qualifying. However, a qualifying penalty was issued to the Atlantic Racing Team when the tyre batches for Young and his team mates’ car were accidentally switched and both drivers had to start from the back of the grid.

Despite the setback, Young battled his way through the field of fifteen with great overtaking skills on a demanding street course, all under the critical gaze of F1 team bosses.

The next event of the JK Racing Asia Series takes place at the inaugural Airtel Indian F1 Grand Prix at the Buddh International circuit from October 28-30, in front of the Formula 1 World Championship once more.

Dylan’s search for financial support continues as he currently doesn’t have the funds to compete. A reduced deal has been arranged through his team sponsor, but further support is needed quickly from Phuket backers for Young to finish his 2011 campaign.

Sponsorship and support at any level will greatly assist Dylan to make the grid at the Indian GP.

“We scored solid points at Singapore, but from here I need to make sure I’m in the cockpit again soon which will really help me take the next step,” Young explained.

“The Indian F1 GP event is in a month and we have found a way to extend the deadline slightly, so I’m hoping I can find the support from someone who will see the performance I put in and recognize my talent and back me.

“Getting to India would really enable me to finish off 2011 in style and give me the necessary races to take my career to the next step in 2012. The last thing I want to happen after last weekend is to have to sit on the sidelines for so long again. I think I deserve the opportunity to get to India and hopefully take that next step and show what I can do.”

Dylan is an ambassador for The Phuket Has Been Good to Us Foundation and is currently supported by Auto Express from Phuket, Energy Watch, Wilson Security, and Atlantic Racing Team sponsor Branson Lifestyle.