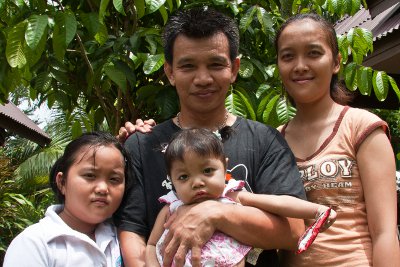 PHUKET: The Rama Foundation at the Ramathibodhi Hospital in Bangkok has pledged to provide the financial support needed to keep Phuket baby Tuptim Jadngooluem alive – for life.

Dr Suporn Treepongkaruna at Ramathibodi Hospital in Bangkok called Tuptim’s father, Rattanachai “Kru Nai” Worvalapol, to confirm that the Ramathibodi Foundation will from now on cover all expenses for any further surgeries Tuptim may have undergo.

The foundation also pledged to ensure Tuptim gets the expensive immunosuppressant drugs that she needs to take each day to stay alive.

At three months old, Tuptim was diagnosed with a liver condition in August last year.

By December, doctors said she had weeks to live.

But thanks to a vital fund-raising effort organized by Tiger Muay Thai, where Kru Nai works as a trainer, and Grainne Farrell, managing partner of Lotus Medical International, Tuptim underwent a marathon 18-hour parent-donor liver transplant surgery in January.

Now the hospital’s foundation has pledged to provide liver care for Tuptim for the rest of her life.

“The daily medication is vital for Tuptim’s survival. It costs 300 baht per day; that’s 9,000 baht per month,” explained Will Elliot, general manager of Tiger Muay Thai.

Last month, the Save Tuptim fundraisers handed over 300,000 baht of as-yet-unused donations to the foundation to go towards providing Tuptim with the ongoing care she needs.

Paying for the daily medication only – with Tuptim suffering no further complications – that money would still not last even three years, explained Mr Elliott.

“The operation [in January] cost about 800,000 baht and Kru Nai thinks it was fully successful so he believes Tuptim will not need to undergo another one,” he said.

“However, the foundation pledged to cover the costs of any future operations needed and travel costs for Tuptim, Kru Nai and [Tuptim’s mother] Nit,” he said.

Kru Nai was deeply grateful and overwhelmed with joy to hear the news.

“Thank you everyone for your donations to baby Tuptim. Thank you to Tiger Muay Thai camp and my boss, Will Elliott, for all their help.

“Thank you to everyone from the Save Tuptim team… and thank you to Dr Suporn and the Rama Hospital Foundation,” he said.

Phuket All Stars and Singapore CC open the ACG today