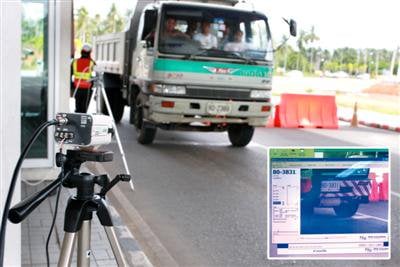 PHUKET CITY: In a bid to crack down on crime, Phuket province wants to set up an automatic license plate recognition (LPR) system and other high-tech security equipment at the Tah Chat Chai checkpoint.

Phuket Governor Wichai Phraisa-ngop on June 17 attended a demonstration of the LPR technology put on by representatives from Secom and the National Electronics and Computer Technology Center (Nectec), which jointly developed the technology.

“We received a report from Kathu Police that a gang of ‘ladyboys’ (trans-sexuals) had fled in a BMW after cheating a tourist out of some money in Patong. We stopped the car at the checkpoint and instructed the suspects to get out, but they rolled up the windows and sped off. We shot at the vehicle and gave chase, but the BMW was too fast and they got away,” he said.

Gov Wichai said he wants the license plate recognition cameras and other new security features in place at the checkpoint in time for the Asean summit meetings in Phuket next October.

The improvements are also needed because of an expected increase in crime resulting from global economic problems, he said.

As Phuket is an island, the Tah Chat Chai checkpoint should serve as the key choke point in the war against crime, with criminals prevented from crossing to and from the island, he said.

To make this a reality, the province is negotiating with the provincial police about funding for the technology, which is already in use at His Majesty The King’s Palace in Hua Hin, Parliament in Bangkok, and in Yala province.

Under the scheme, four cameras would be set up at the checkpoint: two for cars and larger vehicles, and two for motorcycles.

Secom engineer Chatchai Khongmuang said the cameras would be placed in positions where they can automatically record the front and back license plate numbers, along with images of the driver, who would be required to roll down the window.

The data can be stored for up to six months on the system’s hard drive, after which time it can be easily archived for as long as necessary. The technology comes with a one-year guarantee and buyers can opt for long-term service contracts, he said.

The system will not only allow police to keep tabs on what vehicles are on the island, but will also have the ability to notify the police of any changes in the vehicle’s color or appearance since it last passed through – including whether it is being driven by the same driver, the engineer claimed.

Police are automatically alerted when a vehicle on a police wanted list arrives.

In order to get the system working, automatic gates would need to be installed along with a “terrain blocker”, a pop-up barrier that can stop any suspicious vehicles – like the BMW full of thieving ladyboys – from leaving.

A similar system at Tah Chat Chai would make it faster and easier for police to detect suspects by eliminating the need to laboriously review closed-circuit television footage.