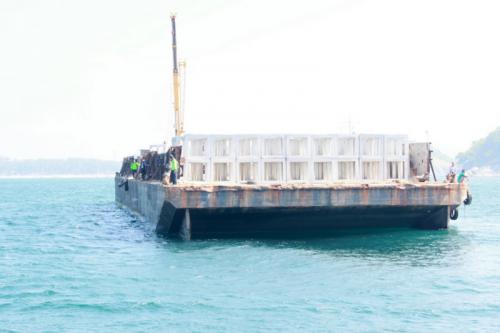 PHUKET: Villagers and marine officers joined together yesterday to drop concrete frames into the sea at Nai Harn Bay as substructures for artificial coral reefs.

“There were over 50 people there to help drop 200 concrete frame-cubes,” said Tanet Munnoy, chief of the Phuket Office of the Department of Marine and Coastal Resources (DMCR).

“Coral reefs are important resources for marine animals. In our area they have been affected by illegal fishing and natural disasters,” Mr Tanet said.

The artificial reef blocks were placed for sea creatures to establish themselves and may be used as dive sites in the future, he said.

The DMCR received a 10-million baht budget to produce 1,300 reef-blocks and place them in areas around Phuket. Last week they sank 200 blocks at Koh Hae, 200 at Koh Bon and 300 at Koh Kaew. In January the remaining 400 blocks will be deposited in the sea around Koh Racha.

“We are working on improving our marine resources. We are also increasing awareness of the importance of coral reefs and encouraging people to help us preserve them,” he added.

Additionally, Mr Thanet says that the program is educating fishermen about fishing practices that will not have long-term negative effects on valuable marine resources.