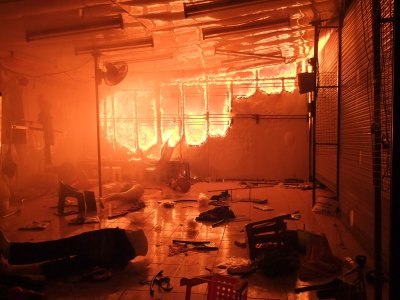 PHUKET: Forensic Police continue to investigate the cause of the fire that ripped through the Koh Kaew Market in Patong last month, raising the distinct possibility that the complex could be rebuilt and open for business before the cause of the blaze is determined.

“As the retailers’ representative, I had discussions with their lawyers two weeks ago. The new market will probably include addresses for each stall so that the vendors will be able to apply for insurance policies. Also, the electrical work will be to a higher standard to ensure safety,” he said.

The work is scheduled to begin in about two weeks and the market should be ready to reopen in October, he said.

“All the same vendors will be back to run their own shops,” he said.

The original Koh Kaew Market, a 200-stall facility, occupied a key location next to the Jungceylon shopping and leisure complex on Rat-U-Thit Road. Many of the vendors, including a large number of ethnic Nepalis, were left penniless after the late-night blaze reduced it to cinders in about two hours.

Patong Police duty officer Chaowalit Neawadee said his station was still awaiting results from Forensic Police who are investigating what caused the fire.

“The fire was probably not arson, as the landlord plans to rebuild it for the vendors,” he said.

There is a history in Thailand of landowners razing markets to collect insurance, clear out unwanted tenants or resell the property for profit.

Mr Tossapol said many vendors were keeping close track of the situation and pleased with the progress.

Yanma La, a 39-year-old Nepali vendor who operated three garment stalls in the old market, said the blaze cost him 4 million baht in destroyed merchandise. He has since been forced to move his operation to the OTOP Market, located about one kilometer away along the same road.

“Thanks to my honesty and good credit going back ten years, the stall owner in Bangkok will allow me to stock merchandise and pay him back later. So now I am counting my blessings,” he said.

“I will come back to run my shops at Koh Kaew again, as it seems business is better at that location than at the OTOP Market,” he said.

“I have been told that the new market would be finished around late October, but it appears that they haven’t done anything yet,” he added.