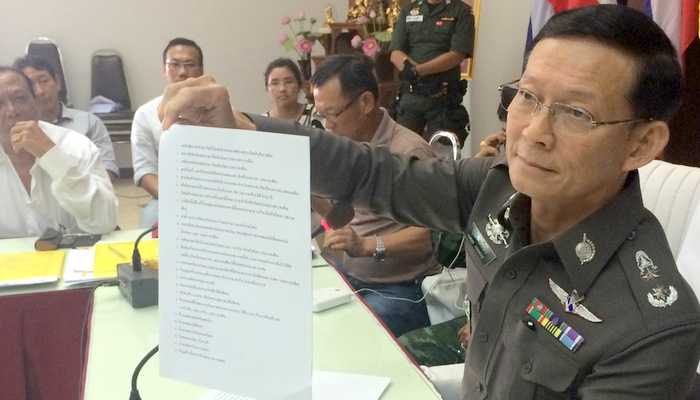 PHUKET: Police have granted the Keesin clan one week to grieve the loss of the head of their family, former Patong mayor Pian Keesin, who died yesterday (story here), before officials move ahead with pressing taxi mafia charges.

“I am aware that Mr Pian passed away. I am sorry for the family,” Region 8 Police Deputy Commander Paween Pongsirin told the Phuket Gazette today.

“However, we will move forward with pressing formal charges against the rest of the Keesin suspects.”

Maj Gen Paween explained that Mr Pian and two of his sons, Prab and Pattawee, along with several other members of the Pisona group of companies founded by Mr Pian, were to present themselves to the Phuket Public Prosecutor’s Office today.

“Since Mr Pian has passed away, we will reclaim our files from the public prosecutor and remove all charges against him – but the rest of the suspects will be charged,” confirmed Gen Paween.

“We will give Mr Prab some time to arrange his father’s funeral. But after that, we will call the suspects to present themselves to the public prosecutor, which I expect will be in about a week.”

The cremation of Mr Pian’s remains is to be held at the Laem Singh Temple on Patong’s beach road on October 18, starting from 2:30pm.

Armed with an arrest warrant, military personnel and Region 8 Police raided the Patong home of Mr Pian on August 28, as they pursued mafia charges against the Phuket kingpin (story here).

Mr Pian, and six other members of his operating company Pisona Group, including his son Pattawee, surrendered to officers at the Royal Thai Navy base at Cape Panwa on September 1 (story here), while Mr Prab, who surrendered to police in Bangkok the same morning, was brought to Phuket in the afternoon under escort by Bangkok police officers. (story here).

All seven were taken to Phuket City Police Station and questioned until 3am, when they were released on 150,000 baht bail each (story here).

All six remaining suspects face charges of extortion and criminal activities carried out by a criminal association (story here).

“They face charges under Section 209 of the Criminal Code, which carries a maximum penalty of 10 years in jail, a fine of up to 20,000 baht, or both,” Gen Paween said.