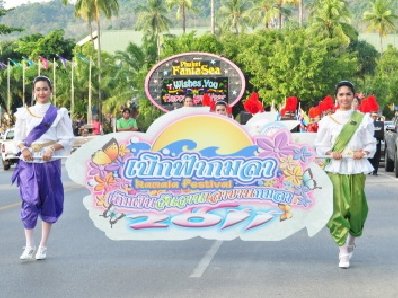 The event began with a sunset parade by Phuket FantaSea, from its showgrounds to Kamala Beach.

Vice Governor Somkiat Sangkaosuttirat officiated at the opening of the event, before the live entertainment began on stage. First up was a show by the King Kong Island dancers, renowned for their “coconut girls” performing the hula.

Other live performances included the Superdance Band and live music by students from the 36th Rajaprajanugroh School Phuket, built in Kamala after the 2004 tsunami.

Juta Dumluck, president of the Kamala Tambon Administration Organization (OrBorTor), said the event is held in collaboration with government agencies and local businesses in order to boost the local economy.

“It attracts investment and helps Kamala to become a world tourist attraction,” he said.

“The many tourist attractions in Kamala draw more than 10,000 visitors from Thailand and overseas every year.

“Kamala Beach is also one of the more peaceful beaches in Phuket, where people can relax in quiet,” Mr Juta added.

The event continues until January 16, with the following list of activities: