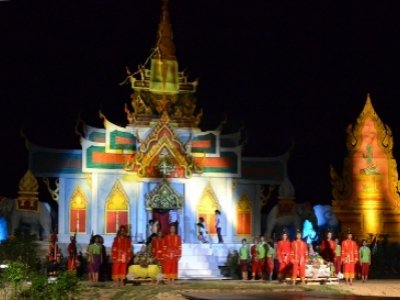 PHUKET: The “Thalang Historical Drama”, being performed nightly at Phuket’s annual Heroines’ Festival currently underway in Thalang, is expected to attract more than 2,000 people each night to watch the show.

“The show last night went very well. Governor Tri Augkaradacha played the part of Rama I, but that was the only performance he will act in during the festival,” Dr Sawit Pongwat, screenwriter and director of the performance, told the Phuket Gazette today.

“Tonight Satun Immigration Superintendent Chayawut Jansomboon will play for the part of Rama I instead of Gov Tri,” he added.

The drama includes a large-scale reproduction of the Battle of Thalang, in which Phuket villagers led by famed Phuket Heroines Mook and Chan routed a Burmese incursion in 1785.

The festival began on Sunday at the Thalang Victory Memorial Field, believed to be the actual site where the battle took place.

“We attract a full house of about 2,000 people every year, but this year I think we will attract even more,” said Dr Sawit.

“This year, students from throughout Phuket City Municipality are also taking part in the drama, so I think their parents will come to see them perform.”

The first rehearsal on Friday went smoothly, and the full rehearsal on Saturday included the “light and sound” elements, such as music played during scenes, live narration and synchronized lighting, said Dr Sawit.

“The cast is doing their best in this drama. They are also looking forward to seeing big audiences each night. It makes them happy about taking part in the show,” Dr Sawit said.

Hopes are high that the good weather will continue, following last week’s spate of freak storms, he added.