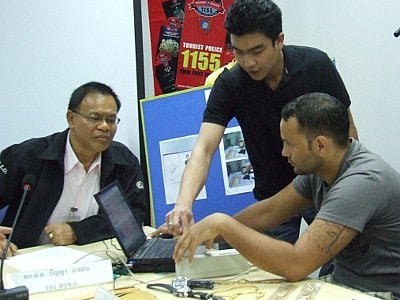 PHUKET: Four Romanians were arrested by Phuket police yesterday and charged with running an ATM card scam that is claimed to have stolen 100 million baht.

All four suspects were arrested at their rented room at the Azzurro Village Hotel on Rat-U-Thit 200 Pee Road in Patong.

In the room, police found 211 unformatted ATM cards and a “skimmer” that reads data from genuine ATM cards issued by banks. Once captured by the skimmer, that data can be printed onto “blank” ATM cards.

Also seized as evidence were two laptop computers and a USB drive.

Maj Gen Panya Mamen, deputy commissioner of the Criminal Investigation Bureau in Bangkok, explained at a press conference in Phuket today that the arrests followed receipt by the Transnational Crime Suppression Center of tip-offs from the London Metropolitan Police and Siam Commercial Bank.

“The tip-offs gave information about foreigners being involved in ATM scams in tourist hot spots, including Bangkok, Pattaya, Hua Hin and Phuket,” he said.

The complaints from London and the bank reported that ATMs in the UK were fitted with devices to record account information to a USB drive.

The USB drive was then brought to Thailand, where the account information was transferred onto blank ATM cards, after which money was withdrawn from the accounts using local ATMs, Maj Gen Panya explained.

“Cash withdrawn using the forged ATM cards was also sent to their home country. We will continue to work with authorities and follow where that money was sent,” he said.

Those arrests led to the four Romanians being arrested in Phuket, he said.

The Romanian suspects are being held at Kathu Police Station.