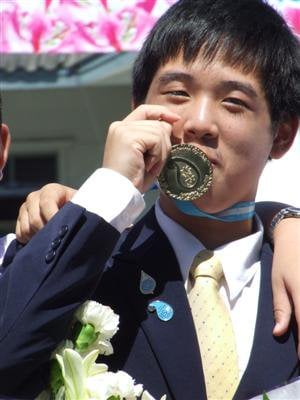 PHUKET CITY: Satree Phuket student Peerasak Sae-eung returned to Phuket yesterday as the island’s first-ever gold medal winner at the International Junior Science Olympiad in Azerbaijan. A crowd was on hand at Phuket International Airport to congratulate him on his victory, which took place earlier this month.

Later the same day, he returned to his school where he told reporters, “I’m very proud to help create a good reputation for my family, my school, Phuket and Thailand. I got 88.41 points out of 100 from three test subjects. There were 260 students from around 50 countries. I was under some pressure there, but I relaxed by going out and playing ball with my friends.”

Peerasak and his fellow team members prepared for the Olympiad by attending a special camp organized by the Development of Science Education Foundation under the patronage of the late HRH Princess Galyani Vadhana and the Institute for the Promotion of Teaching Science and Technology, he said.

Peerasak is the second of three brothers born into a family of local fish farmers.