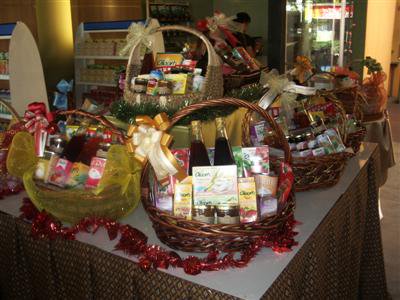 PHUKET CITY: Phuket residents can help improve the lives of some of Thailand’s poorest citizens by purchasing products from ‘Thung Ngern Thung Thong’, a new store that opened in Phuket City on Saturday.

Thung Ngern Thung Thong, which translates as ‘bag of silver, bag of gold’, is the first-ever store in Phuket with permission from the Office of the Royal Household to sell products made by His Majesty The King Bhumibol Adulyadej’s Royal Development Projects.

Products, including honey, canned and dried fruits, drinks and other snacks, are made by poor farmers and hilltribe people in the North of Thailand.

The produce comes from HM The King’s Royal Chitralada Agricultural Projects and Royal Projects in the North made under the Doi Kham brand.

Theerayuth Naveekarn, the store’s Phuket-born manager, said he was proud to be promoting products made by the Royal Project Foundation.

“Customers can be sure that if they purchase these products the money they spend will go to the foundation and to the farmers, especially the hilltribe people in the North,” he said.

Store assistants would be on hand to explain the background of the products, while leaflets providing the same information would also be available. Royal Projects currently produce more than 100 different high-quality products, he said.

The store will initially stock only processed products, but its product line will expand in the future, he said.

Rattanawut Watcharothai, Director of public relations and promotions at the Office of the Royal Household, was the guest of honor at the store’s opening ceremony.

“He was also concerned that the advertising wasn’t widespread enough,” he said. “I’m thinking of building a website for the store.”

The Royal Projects were established in 1966 following HM The King’s efforts to provide hilltribe people with alternative cash crops to opium, which was widely cultivated in Northern Thailand at the time.

The projects have four specific goals: to ‘offer a helping hand to all mankind’; to preserve watershed areas and forests; to eradicate opium cultivation and opium addiction problems; and to encourage appropriate utilization and conservation of land and forest resources.

Thung Ngern Thung Thong is located at 430-434 Phuket Road, about 50 meters from the Bang Niew Intersection.

Phuket’s ‘Golden Boy’ back in town