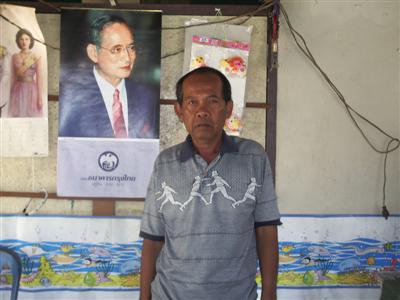 WICHIT, PHUKET: A poor family with no place else to go is the only thing holding up government plans to complete a road project that could reduce traffic congestion on the bypass road at the Darasamuth School Intersection.

The 550-meter-long road starts just north of HomeWorks, on the southbound lane of the bypass road, and runs up a hill around the back of the retail outlet, then down towards the campus of Darasamuth School.

It is supposed to run back down through the school campus and connect with Wichit Songkraam Rd, but it doesn’t.

Just past a small Christian cemetery, the two-lane road comes to an abrupt halt at a brick wall, the back of a rustic residence established there over 20 years ago by Chamnan Rungklin, now aged 59.

The area occupied by Mr Chamnan and his four family members, about one rai, abuts the back parking lot of the sprawling Darasamuth School, where 2,908 students, ranging from kindergarten to Matthayom 2, study every day.

The land does not belong to Mr Chamnan, however.

The native of Nakorn Sawan settled in the area over 20 years ago when there was no HomeWorks, no Central Festival and no bypass road. Darasamuth School, established in 1964, was much smaller than it is today.

In return for the right to settle on the land, Mr Chamnan signed an agreement with the Muang District Office years ago, agreeing to vacate the area without complaint if it was ever needed for the public good.

But now that the time has come, Mr Chamnam and his family have no place else to go.

Gov Wichai, who announced road building as his primary gubernatorial objective when he took up his post in March of this year, would like to find a solution to the problem.

He was told that the land for the new road was donated by the by Darasamuth School, in the name of the Catholic Foundation of Surat Thani, and by Mr Sopon Ekvanich, who comes from a wealthy family of Phuket landowners.

Gov Wichai suggested that the Wichit Tambon Administration Organization build temporary shelter for the family on empty land nearby.

And Mr Chamnam told the Gazette he agrees with the plan.

“We accept that we should move out and we don’t want to have problems with government officers, but we simply have no place else to go. It would be good if they provide a new place for us, but we would like to continue living in the same area as we would like to remain near our neighbors,” he said.

Mr Chamnam’s family is part of a poor community living behind Surakul Stadium on Ekwanich Rd.

At 5pm on Tuesday, workers from the Wichit TAO visited the area proposed for Mr Chamnam’s new home, but found the area too small and that building there would block another family’s access to their own home.

As of yesterday afternoon, Mr Chamnan was still waiting for Wichit TAO officials to return with an alternative solution.

Phuket’s ‘Golden Boy’ back in town