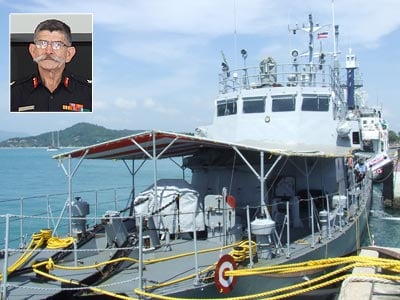 CAPE PANWA, PHUKET: The Royal Thai Navy completed the latest in a series of training exercises with their counterparts from India earlier this week.

The Thai side was led by Chief of Staff Rear Admiral Nawin Thananate.

The training ended with a meeting at the Royal Thai Navy Third Naval Area Command base at Panwa Cape on Thursday.

This year was the ninth biennial training exercise.

“The meeting is very important because we have shared maritime boundaries. After what happened in Bombay on November 26, 2008 it is especially important that we make safeguarding maritime interests of paramount importance,” said Gen Ak.

“We need a co-ordinated patrolling and surveillance effort. The next meeting will be in April, 2010,” he added.

Thai and Indian territorial waters do not overlap, but there is overlap between the much larger economic exclusion zones.

India keeps a large military presence in Port Blair – a strategically important location as it is the entrance to the Strait of Malacca – through which half of the world’s oil supplies are shipped.

The vessel is named after a small, uninhabited isle in the Nicobar southern group that is a wildlife reserve.

Phuketians turn out for mass show of national pride