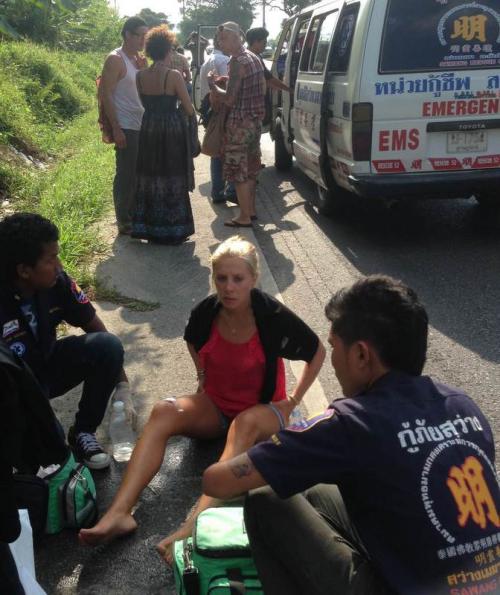 PHUKET: A visa-run van returning to Phuket from Ranong with 10 Russian passengers flipped three times as it took a sharp turn at “high-speed” on the wet roads of Phang Nga yesterday.

None of the passengers were seriously injured.

“On the way to Ranong the driver was going very, very fast. We understood that he was a professional driver, but everyone felt uncomfortable with the speed,” said Kristina Doran, a Russian expat who moved to Phuket last July.

On the return trip the driver slowed down somewhat, “like 110 km”, Ms Doran said. The passengers relaxed, and as it started to rain, Ms Doran fell asleep.

“That’s when the van flipped three times. I heard the road was wet and there was a sharp curve. People slammed into each other as the van was turning over,” she told the Phuket Gazette.

After the van came to a stop, the passengers managed to open a door and get out. Two women had trouble breathing and four people had back problems, but nobody appeared to be seriously hurt, Ms Doran said.

“It was really magic that everyone was okay,” Ms Doran added.

Immediately after the tour van passengers climbed free of the wreckage, a car moving at high-speed also flipped on the curve, Ms Doran said

Six passengers from the tour van were taken to Bangkok Phuket Hospital.

“They had bruises, scratches, and some had rib pain, but no one was admitted to the hospital,” emergency room staff told the Gazette.

The hospital bill was covered by the visa-run company’s insurance, Ms Doran explained.