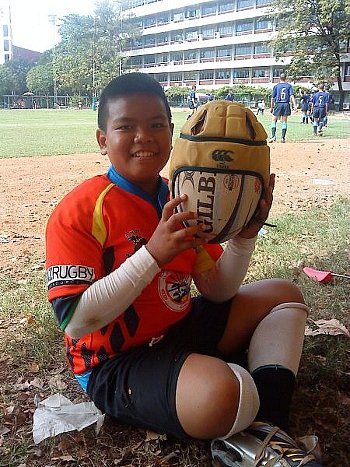 PHUKET: Members of Phuket’s Lomas Rugby club are appealing for donations as they get ready for a busy tour schedule.

The club, which relies on contributions to pay expenses, is sending teams to two important youth tournaments in the coming weeks.

The under-15 and under-12 squads will compete in the National Sevens Regional Qualifiers to be held in Krabi on November 27 and 28.

The under-15s will be aiming to qualify for the National Championships to be held next year.

Meanwhile, the annual festival of youth rugby will again take place at Kasetsart University in Bangkok on December 18 and 19. The Lomas will send three teams.

The under-12s will be hoping to retain the trophy they won last year, while the under-15s will look to continue their recent good form.

The competition will also mark the first ever tour for the Lomas under-10s, many of whom have never traveled outside Phuket. In total, 40 Phuket youngsters will make the trip to Bangkok.

The Phuket Lomas have quickly established a reputation as one of the most exciting young rugby clubs in Thailand and Head Coach Patrick Cotter is very grateful to all who have supported the club in the past, and hopes they will continue to do so.

“Many of the players have never been outside Phuket, so the tour will be a big step in their development,” he stated.

“To do this we again ask for your help. As a voluntary club we don’t have available funds to pay for the expenses we will incur.

“I know many of you have put your hand in your pocket in the past and due to that we have been able to achieve so much in a short time, and we thank you. We couldn’t have done it without your help.”

To make a donation or become a sponsor, contact Pat Cotter.

Patong Municipality will supply the bus to transport the players to Bangkok, while Island Furniture, owned by Khun Siriporn and Alan Cooke MBE, have generously agreed to sponsor Lomas Rugby for the coming year.