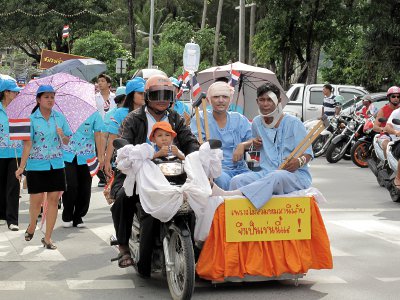 PHUKET: Over a thousand Patong residents yesterday took part in a parade in support of the “100% motorcycle helmet use” campaign underway across Phuket.

The parade, held along the beach road in Patong, is part of the public awareness phase of the campaign.

It was organized by Kathu Police, the Patong Taxi Federation, and Patong Municipality.

The safety campaign, which started in Phuket City Police District in April, is now being expanded island-wide.

It is intended to bring motorcycle crash helmet use on the island to 100%, both among drivers and passengers.

From December 1, both drivers and passengers caught at Kathu Police checkpoints without helmets will have their licenses confiscated and held until the offender views a locally-produced film showing graphic images of road accident victims.

This initiative has been used in Phuket City since July and has seen a marked increase in helmet use.

Existing safety helmet laws will be strictly enforced on January 1, when Kathu Police will fine every motorcycle rider and passenger without a helmet and also make them watch the film.

Tuesday’s parade departed from the junction of Phang Muang Sai Khor Road and Prachanukroh Road at 2.30pm, before going down the beach road and ending at Patong Municipal Football Field.

Behind the motorbikes local residents and students walked along the route in a show of support.

At the parade, Kathu Police Superintendent Arayapan Pukbuakao said, “The first phase of the helmet campaign from September to November focused on radio, newspaper, and TV publicity. We have also informed both private and government sector groups and held a training seminars on how to operate motorcycles safely,” he said.

Among those taking part in the sessions were students, motorcycle taxi riders, retailers, hotel owners, and entertainment business owners, he said.

“From now on, every motorcycle rider and passenger in Kathu Police District must wear a helmet,” he said.