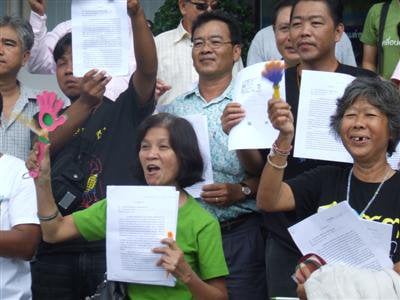 The move echoes similar actions taken by People’s Alliance for Democracy (PAD) leaders around the country.

The document, which named three local UDD leaders, claimed the red shirt action was an attempt to obstruct justice and amounted to contempt of court.

The Supreme Court convicted Mr Thaksin of corruption in a land deal while he was prime minister.

He was sentenced to two years in jail late last year.

Mr Thaksin, now living in exile in Dubai, has not returned to Thailand to serve his sentence.

The UDD is collecting signatures for a petition requesting a royal pardon for Mr Thaksin.

UDD leaders intend to deliver the petition to the Office of His Majesty’s Principal Private Secretary in Bangkok on Monday.

Watchara Malikaew, a local UDD member, told the Gazette that around 10,000 Phuket residents have signed the petition.

At least 100 UDD members would take buses to Bangkok and deliver the petition to HM The King on Monday, he said.

The list will be sent to Bangkok today, she said.