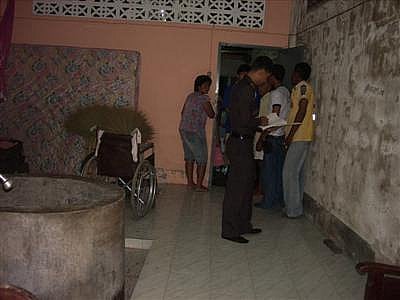 PHUKET: Police are treating as accidental the apparent drowning death of an elderly woman whose body was discovered in the family water well early this morning.

Thalang Police Inspector Lt Patiwat Yawdkhwan was informed of the death by the family of the victim, 80-year-old Saner Bureerak, a resident of Thepkrasattri Village 4.

Responding to the 4:30am call with Kusoldharm Foundation rescue workers, police found that family and friends of Miss Saner had already used ropes to pull her body from the concrete well, located in a covered area behind the family’s home.

Rescue workers estimated the depth of the water in the well at more than 20 meters.

Miss Saner’s relatives, descendants of her older brother, were deeply upset by the tragedy.

They said Miss Saner was frail and mostly got around with a wheelchair.

She likely pulled herself up to the rim of the concrete basin, lost her balance, and fell in, they said.

They accepted her death as an accident and told police they do not intend to file a criminal complaint.